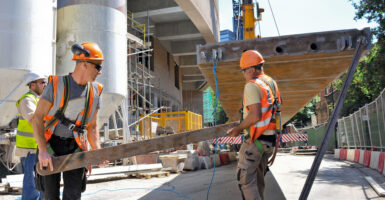 Connection to work is associated with a higher degree of human connectedness, while unemployment can hurt mental health and physical health, even affecting mortality by as much as a year and a half. (Photo: Getty Images)

In March, they transformed the child tax credit into a monthly child allowance—no work conditions attached. If made permanent, as they are now trying to do, it would be the second-largest expansion of the welfare state in U.S. history.

The credit used to increase as low-income parents worked more. The allowance, however, goes to nonworking families. Proponents insist that this giveaway won’t substantially affect low-income parents’ interest in working, but a new study has made it clear: Fewer low-income families will work.

Earlier reports have underestimated the effect of eliminating the child tax credit’s pro-work incentives. But researchers at the University of Chicago have found that 1.5 million workers—2.6% of all working parents—would exit the labor force if the child allowance is made permanent.

Accounting for the drop in work, the authors calculate that the child allowance would not ease deep child poverty (families making less than $18,945). This is a far cry from the 39% reduction in deep poverty the left promised.

Now Congress must determine whether it matters if fewer low-income families work.

Three decades ago, both the right and left knew that work mattered for low-income Americans. Why? They had decades of convincing evidence.

In the early 1990s, the U.S. had a 60-year-old program that operated similarly to the Biden child allowance. The long-term effects of providing monthly welfare checks without conditions were dismal. Welfare dependence continually rose. Some 90% of cash safety-net recipients were single mothers. Nearly 9 in 10 families were workless. The majority of families found themselves trapped in long-term poverty, staying on the rolls for an average of eight years.

A mother’s welfare dependence was associated with a reduction in her child’s math and verbal ability test scores. Their odds of graduating high school were dramatically lower. Even one year of exposure to welfare in early adolescence was “associated with a reduction in schooling of about 0.3 years.” Safety net receipts even had a negative effect on earning outcomes for boys after age 25.

Democrats and Republicans came together to make work—or at least training and preparation for work—a condition of public assistance. In 1996, the bipartisan welfare reform bill required work for the work-capable in exchange for welfare benefits.

These reforms brought clear, positive results. Dependency declined for the first time in a half-century. The percentage of single mothers who worked rose from 51% in 1992 to 76% by 2000. The poverty rate in single-parent families dropped by nearly 60%. The most significant result: Child poverty, which had been static for decades, fell by almost 8% in the following decade.

In fact, the positive benefits went beyond finances. When mothers formerly dependent on welfare found employment, they saw better physical health, improved emotional and psychological well-being, and even better health and behavioral outcomes for their children. Teen pregnancies—and the abortion rate—fell sharply.

It’s clear that work is important to families—whether they are low-income or not. After long-term unemployment, people earn less—as much as 5% less a year. But work also affects well-being. Connection to work is associated with a higher degree of human connectedness, while unemployment can hurt mental health and physical health, even affecting mortality by as much as a year and a half.

Low-income individuals, like all Americans, deserve real opportunity for themselves and their children. While the safety net can be effective—as intended—at alleviating material deprivation, the long-term policy goal should be for families to break out of the cycle of dependence and poverty by improving their upward mobility and well-being.

Congress can fix welfare to do just that. It can start by rejecting misplaced calls to make the Biden child allowance permanent.