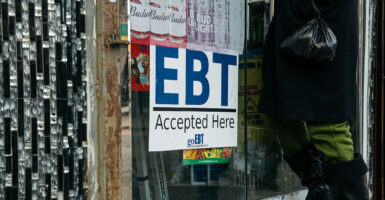 For decades, conservative policymakers have worked to reform welfare—so it’s a temporary safety-net, not a way of life. Bad welfare policy should not separate vulnerable, able-bodied Americans from work and opportunity.

Much of welfare reform, including the transformational 1996 reforms, has focused on the necessity of work expectations in a few key federal transfer programs—primarily the Supplemental Nutrition Assistance Program (food stamps) and the Temporary Assistance to Needy Families program. Unfortunately, these programs have been undermined by decades of administrative implementation exempting large numbers of able-bodied beneficiaries from work expectations.

The Trump administration took welfare reform seriously. In his 2018 executive order, “Reducing Poverty in America by Promoting Opportunity and Economic Mobility,” President Donald Trump prefaced his call for reforms to promote and strengthen marriage: “The welfare system still traps many recipients, especially children, in poverty and is in need of further reform and modernization in order to increase self-sufficiency, well-being, and economic mobility.”

The administration first bolstered work expectations in the food stamp program. The U.S. Department of Agriculture issued a modest regulatory change that only applies to able-bodied individuals without dependents–beneficiaries who are aged 18-49, not elderly or disabled, and do not have any children or other dependents in the home.

Of the more than 40 million food stamp beneficiaries, it would have only applied to 688,000 individuals in fiscal year 2021.

The reform was scheduled to go into effect in April 2020, but, recognizing the impossibility of implementing it in the midst of a closed economy, the Department of Agriculture issued guidance to states suspending work expectations

for the duration of the COVID-19 national emergency.

The administration also sought to “increase program integrity and reduce fraud, waste, and abuse,” and so proposed closing a loophole that allowed millionaires to get food stamps. The regulation reversed “broad-based categorical eligibility.” States used it as a loophole to get around food stamps’ federal eligibility limits, ignoring the asset requirement (how much the applicant has in the bank or property).

The administration hasn’t been alone in pursuing welfare reform. Republicans in Congress also coalesced around fundamental reforms to the food stamp program. In 2018, then-House Speaker Paul Ryan emphasized the need for reforms by urging Congress to enact modest changes to strengthen work requirements in the food stamp program as part of the farm bill. Unfortunately, these reforms did not become law.

Congressional leaders still advanced the next phase of welfare reform. In 2017, Sen. Mike Lee, R-Utah, and four co-sponsors, and Rep. Jim Jordan, R-Ohio, and 79 cosponsors introduced the Welfare Reform and Upward Mobility Act. The legislation focused on improving the program’s integrity on welfare spending by requiring the federal government to report all means-tested welfare spending and strengthening work expectations for the able-bodied.

Also in 2017, Rep. Garret Graves, R-La., and 101 cosponsors proposed a further strengthening of food stamp work expectations in the Supplemental Nutrition Assistance Program Reform Act. These reforms, which have broad public support, would both promote self-support among food stamp recipients and result in significant savings.

More recently, in early 2019, Rep. Kevin Brady, R-Texas, and 94 cosponsors, and Sen. Steve Daines, R-Mont., and 4 cosponsors proposed substantial reforms to the Temporary Assistance to Needy Families program in the Jobs and Opportunity with Benefits and Services for Success Act.

Building on the reforms enacted in 1996, which contributed to cutting the number of people on welfare in half, increased employment of low-income single parents, and reduced the poverty rates of children and black Americans to all-time lows, the Brady–Daines legislation “embodies the principle that able-bodied recipients should work or prepare for work as a condition of receiving aid. Nearly 9 nine out of 10 Americans agree with that principle.”

With the arrival of COVID-19 in the U.S. at end of March, the U.S. saw one of the sharpest economic downturns in U.S. history. This caused immediate and unprecedented financial ramifications for the millions of Americans who were suddenly unemployed—particularly low-income Americans.

While there has been an uptick in the economy—10.6 million jobs were added between May and August, and the unemployment rate fell to 7.9%–many low-income Americans remain on the edges of the economic recovery. Both food stamp and Temporary Assistance to Needy Families work expectations have been paused until the economy recovers.

While reform to the welfare system is indispensable to the long-term goal of moving at-risk Americans off the side-lines, a strong economy is also essential. By the end of 2019, employees of all kinds witnessed their incomes rise at the sharpest rate in a decade.

In fact, the bottom 25% of workers, in particular, saw a 4.5% increase from a year earlier–and minority groups saw the largest gains in real median income.

While the COVID-19 recession represents a setback for workers’ progress, a strong economy and smart safety-net can and will restore those gains.