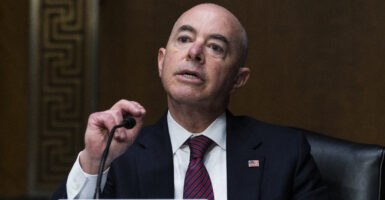 The Department of Homeland Security is at least the 20th federal agency to have created or proposed tracking lists for employees requesting religious accommodations from the COVID-19 vaccine mandate.

A rule placed in the Federal Register on Friday allows the DHS “to collect and maintain records on employees and applicants for employment” that are seeking certain religious and medical accommodations. A vaccine mandate remains in place for the federal workforce.

“This notice also clarifies DHS’s collection, use, maintenance, and dissemination of records needed to process, manage, maintain, and resolve reasonable accommodation requests based on a medical condition/disability or a sincerely held religious belief, practice or observance,” the proposed rule says. “This modified system will be included in DHS’s inventory of record systems.”

Public comment for the DHS rule closes on May 2.

The volume of such rules should raise concerns, said Sarah Parshall Perry, a legal fellow at The Heritage Foundation, the parent organization of The Daily Signal.

“Collecting data on religious objections—and not just for the vaccine—means the Biden administration is creating a blacklist of federal employees,” Perry told The Daily Signal. “To have one massive database with every federal employee and applicant that has requested religious accommodations is concerning.”

The rules are different, and vary among agencies. Generally, the agencies plan to collect religious affiliation, the reasons given for religious accommodations requests, names, dates of birth, and addresses that could be shared between federal agencies, according to Marshall’s office.

The notices also generally don’t explain if it will store the data, why agencies need to share the data, or why it’s needed beyond the decision to grant or deny an employee’s religious accommodation request.

“These accommodation requests include, but are not limited to, requests for modifications to workplace safety protocols and related to public health mitigation measures, such as use of Personal Protective Equipment (PPE), physical distancing, immunization requirements, testing, travel, and quarantine requirements,” the proposed DHS rule says.

The proposed rule continues: “By requesting an accommodation, employees or applicants for federal employment are authorizing DHS to collect and maintain a record of the information submitted to support the medical condition/disability or religious accommodation request.”

The Department of Homeland Security did not respond to an inquiry for this story.

Data for medical exceptions is justified under the law because sometimes employers need to make physical accommodations for employees with disabilities or an illness. By contrast, collecting information on religion raises certain constitutional and legal issues.

The federal government is the single largest employer in the United States, and has gotten tens of thousands of requests for religious accommodations to avoid the vaccine.

“As a nation founded on religious freedom, citizens should be confident in their government’s handling of information related to their religious beliefs and how they apply to their personal medical decisions,” Marshall said in a statement last week, before the proposed DHS rule.

“Instead, we have an administration that has pursued a coercive federal approach to mandatory vaccination, including fear of retribution for exercising this religious freedom,” Marshall continued. “I’m proud to lead on legislation to ensure federal agencies are not exchanging and tracking Americans’ private information following the request of a religious accommodation or exemption, opening up the door for instances of discrimination based on individuals’ beliefs in the future.”