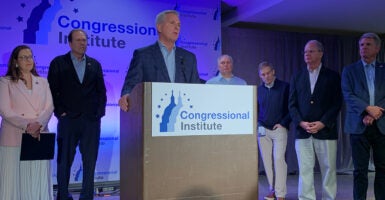 Stefanik added that Americans also face record high gas prices, a grave crisis at the southern border, worsening crime, and a national security crisis. She laid blame for these crises at the feet of the Biden administration and congressional Democrats:

And these crises, make no mistake, have been created by President Biden and House Democrats’ failed leadership and reckless policies. And yet, despite this, President Joe Biden, Speaker Nancy Pelosi, and House Democrats are doubling down on this failed agenda and trying to pass the buck for the pain they are causing American families.

But I’m a believer that the American people are smart. They know that they cannot afford Democrats’ far-left socialist agenda any longer. According to a new poll, 60% of Americans disapprove of President Biden.

House Minority Whip Steve Scalise, R-La., said the good news is that Republicans have “ideas to fix the border crisis, to fix the gasoline increases, … to address inflation, [and] to allow parents to have a role in their kids’ education.”

About a year ago, Republicans created seven task forces to listen to American citizens and “find the solutions for America to a lot of the problems the Democrats have created,” House Minority Leader Kevin McCarthy, R-Calif., said.

Although some plans of the task forces already have been announced, McCarthy said, GOP leaders likely will release the complete policy agenda by the end of summer.

The seven leaders of each task force began the three-day retreat, also called the House Republican Issues Conference, by highlighting each area they say they will focus on in coming months and years.

Examples abound of Big Tech censoring facts, as it did in the case of the New York Post’s reporting on the Hunter Biden laptop story, Rodgers said.

Tech companies such as Facebook and Twitter also “manipulate and harm our children,” she said, noting concerns over companies’ selling of users’ personal information and their lack of transparency.

To address such concerns, Rodgers said, “we are looking at scrapping Section 230 for the biggest companies and making sure new and smaller platforms have a fair chance to succeed by retaining existing Section 230 protections for them.”

Section 230 of the federal Communications Decency Act protects tech companies from lawsuits over what they do, and do not, allow on their platforms.

“We also have proposals to strengthen antitrust review, require transparency, and put people in control of their own data,” she said.

Although there is “clearly no silver bullet” to solve the issues of Big Tech censorship, Rodgers said, she and the other members of the task force are committed to holding such companies accountable.

Jordan also criticized Democrats for “what they tried to do to moms and dads who simply want to determine their children’s education.”

The Ohio Republican was referring to Attorney General Merrick Garland’s instruction to the Justice Department, in particular the FBI, to investigate cases in which parents challenge the actions and policies of elected local school boards.

Republicans remain committed to “defending and respecting the Bill of Rights, the Constitution, and Americans’ liberties,” Jordan said.

“We’ve watched over the last 14 months or so, 15 months, as we’ve seen an administration act in the best interest of other countries, becoming more dependent upon other countries for energy resources,” Rep. Garret Graves, R-La., said.

Americans also have watched as “prices skyrocket and become completely unaffordable” because of the left’s policies, Graves said.

Graves said his task force is ready to create a “path forward where the United States can play a leadership role in increasing energy resources for the United States citizens [and] for our allies, increasing affordability, reducing emissions, and ensuring that we once again achieve that objective of energy independence.”

The task force led by Rep. John Katko, R-N.Y., is focused on border security, cybersecurity, and police and crime issues.

“The border is wide open,” Katko said, adding that lax enforcement of immigration law by the Biden administration has led to tens of thousands of illegal immigrants crossing the border, some of whom are on America’s terrorist watch list.

“And in addition to that, we have a huge drug issue in this country,” Katko said, noting that “for the first time in our nation’s history, we have more than 100,000 drug overdose deaths.”

Although the border crisis is affecting every state across the country, an even greater threat is cybersecurity, the task force leader said.

As for rising crime and the “vilification of police officers and the defunding of our police,” Katko said, he is committed to supporting men and women in law enforcement.

Guthrie criticized Democrats for having “a one-size-fits-all” approach to health care. Instead, he said, Republicans are looking “at what can help the individual.”

“Health care has to be fixed,” Buchanan said, because rising costs are “bankrupting middle-class families.”

6. Jobs and the Economy

Rep. Patrick McHenry, R-N.C., leader of the Jobs and the Economy task force, wasn’t present for the press conference, but McCarthy spoke directly to the current economic challenges.

Right now, the House minority leader said, Americans are increasingly asking, “Can we afford it?”

He said the answer is no, and promised that Republicans have or are developing better solutions to address these crises.

McCaul explained a couple of ways that American leaders can stand against the Chinese Communist Party.

America should arm Taiwan against China, to prevent a similar situation to what we are seeing after Russia invaded Ukraine, he said.

Also of concern to the U.S. is a hypersonic missile launch by China that can “go around the world and land with precision, that can carry a nuclear payload,” McCaul said.

To combat this threat, the Texas Republican said, America needs to limit the kinds of U.S. technology exported to China.