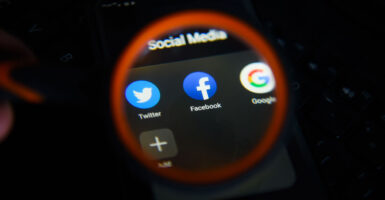 The CEOs of Twitter, Facebook, and Google are slated to testify Wednesday before the Senate Commerce Committee on Section 230 and related matters. (Photo: Omar Marques/SOPA Images/LightRocket via Getty Images)

On the eve of a Senate committee hearing with technology company executives, The Heritage Foundation outlined its recommendations for reforming Section 230 of the Communications Decency Act.

Heritage’s proposed reforms attempt to strike a balance by protecting everyday Americans who engage on social media platforms while preserving the free market environment in which these companies operate.

Section 230 has become a primary target of conservative lawmakers and President Donald Trump amid growing complaints about anti-conservative bias at companies such as Google, Facebook, and Twitter. One of the most important parts of the 1996 Communications Decency Act, Section 230 protects these companies from liability.

Trump has said he want to repeal the provision, and lawmakers have proposed a range of reforms.

In the new Heritage report, “Section 230—Mend It, Don’t End It,” Klon Kitchen, director of Heritage’s Center for Technology Policy, outlines seven specific reforms to the law—a policy road map for lawmakers as they consider changes.

The new Heritage report says the vague language of Section 230 and subsequent judicial interpretations of it have contributed to recent concerns. That’s why, Kitchen writes, “It is high time that the scope and conditions of Section 230 are clarified.”

Among his recommendations are specific changes to Section 230, which include better defining and striking vague language in the statute, clarifying the role of a publisher, removing liability protection for bad actors, and sunsetting the provision every seven years. (Read the full report and all of the recommendations on Heritage.org.)

Kitchen says that “the evolution of the internet, and growing concerns about political bias online, require that the statute be clarified and refined.”

He noted that concerns about technology companies span the political spectrum. A Pew Research study revealed that 72% of Americans believe that social media companies “have too much power and influence in politics today.”

In the report, Kitchen outlines examples of bias and mistreatment against conservatives. He cites Facebook’s decision to prevent a conservative organization from running a paid ad due to a fact check, Twitter’s adding a label to Trump’s tweets about election fraud, and Google staffers’ calling Ben Shapiro and others “Nazis.”

Wednesday’s hearing will take place at 10 a.m. and will be streamed live on the Senate Commerce Committee’s website.