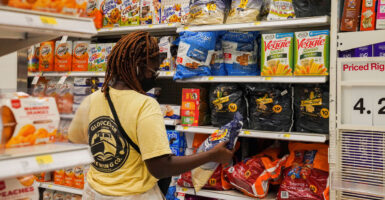 The year-over-year inflation figure is an increase from September’s 5.3% level, marking the highest level in 30 years, according to the Bureau of Labor Statistics report. Economists surveyed by The Wall Street Journal projected the Consumer Price Index would increase to just 5.9% in October.

The core price index, which excludes volatile categories like food and energy, jumped 0.6% in October, an increase from September’s 0.2% figure, according to the Bureau of Labor Statistics.

“I do think we’re moving into a new phase where inflation is broader and where things are going to get a little more intense,” Laura Rosner-Warburton, senior economist at MacroPolicy Perspectives, told The Wall Street Journal. “Part of that reflects that [supply chain] bottlenecks are not resolved going into the holiday season, when a lot of purchases get made, and that the economy is doing really well, so you have strong demand.”

Additionally, the Producer Price Index, which measures inflation at the wholesale level, rose 8.6% year-over-year as of October, the Bureau of Labor Statistics announced Tuesday.

The Federal Reserve announced on Nov. 3 that it would begin scaling back its monthly bond purchases by $15 billion starting in November to combat growing inflation. The Fed did not say it would raise interest rates from around the current near-zero level.