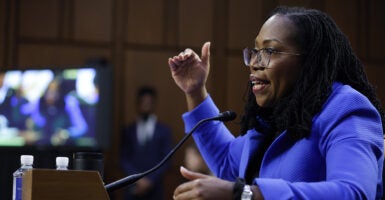 Identifying Ketanji Brown Jackson’s judicial philosophy and measuring it against how America’s founders designed the judiciary is critical for the Senate to properly evaluate her nomination to the Supreme Court. Pictured: Jackson testifies during her confirmation hearing before the Senate Judiciary Committee in Washington, D.C., March 23, 2022. (Photo: Chip Somodevilla/Getty Images)

“I do not have a judicial philosophy, per se,” Judge Ketanji Brown Jackson told the Senate Judiciary Committee last year.

This week, the committee held its hearing on her nomination to replace Supreme Court Justice Stephen Breyer, and identifying her judicial philosophy and measuring it against how America’s Founders designed the judiciary is necessary for the Senate to properly evaluate her nomination.

“Judicial philosophy” is a fancy term for what a judge thinks her job is and how to do it.

The first question is, what do we already know about Jackson’s judicial philosophy? Last year, she said that she had not “develop[ed] a substantive judicial philosophy.” Instead, she told Sens. Ted Cruz, R-Texas, and Mike Lee, R-Utah, she would “apply the same method of thorough analysis to every case, regardless of the parties.”

But this only describes the minimum we should expect of any judge.

Similarly, Jackson last year used the word “precedent” dozens of times to emphasize that, as a lower court judge, she was bound by the decisions of the courts above her. Well, she has now been nominated to the highest court in the land, where she will no longer be so bound.

None of this helps the Senate understand how Jackson would, as Justice Clarence Thomas described the judicial task, “interpret and apply written law to the facts of particular cases.”

The second question, then, is, what did we learn about Jackson’s judicial philosophy from the hearing this week? Like Jackson, Justice Sonia Sotomayor had served as a U.S. district court and U.S. appeals court judge when she was nominated in 2009. When asked to describe her judicial philosophy, Sotomayor responded, “Simple: fidelity to the law.”

Needless to say, especially in light of Jackson’s previous denial that she had a judicial philosophy, the Senate and the American people need more of an answer.

Here’s where it gets interesting. Anticipating that Republicans would focus on the issue, committee Chairman Richard Durbin, D-Ill., the first questioner, opened by asking Jackson to describe her judicial philosophy.

Less than a year ago, Jackson said she had not evaluated even “broader legal principles” relevant to this question. But on Tuesday, she described a comprehensive three-part “methodology” obviously framed to resonate with Republicans.

Jackson, for example, embraced “adherence to text” and asserted that the goal of interpreting written law is to determine “what those words meant to the people who wrote them.” She even used the words “original public meaning” that five years earlier Sen. Amy Klobuchar, D-Minn., told Supreme Court nominee Neil Gorsuch “are the buzzwords for originalism.”

On Wednesday, Sen. Sheldon Whitehouse, D-R.I., made confusing what—at least until that point—had seemed relatively clear. Jackson said that searching for the “original public meaning” of the Constitution’s text was her interpretive “methodology.” Whitehouse, however, called originalism not a methodology, but a judicial philosophy, which, he said, judges did not need to have at all.

Whitehouse was right about one thing. Judicial philosophy, he said, “can be a screen for a predisposition that judges should not have but that folks and powers and interests influential in the process may very well want them to have.”

Yes, and that’s why it is so important to discover as much as possible about a nominee’s judicial philosophy.

Judicial philosophy includes not only the kind of methodology that Jackson embraced, but a broader understanding of the power and proper role of judges. On that, Jackson told Sen. Charles Grassley, R-Iowa, that she is “very acutely aware of the limitations on my power as a judge” and rejected the idea that the Constitution is a “living” document with meaning that changes with the times.

Grassley asked Jackson whether foreign law is relevant to interpreting the Constitution. She responded that while foreign law might be relevant in “very, very few” cases, such as those involving treaties, it should “certainly not” have any role in constitutional interpretation. This is similar to how the late Justice Antonin Scalia addressed this issue when he and Breyer spoke at law school events back in 2005.

Jackson several times stressed that she tries to “stay in her lane” as a judge and that “the charge of the judge is to impose the law as written.”

Are we witnessing, in the opposite direction, the “confirmation conversion” that the Los Angeles Times in 1987 claimed Supreme Court nominee Robert Bork had undergone, shifting how he expressed his views to facilitate his confirmation?

Here are some additional considerations.

First, when he chaired the Judiciary Committee in 1987, then-Sen. Joe Biden opposed the Bork nomination squarely because Bork embraced the very judicial philosophy that Jackson has now endorsed.

Additionally, in 2005, Biden was one of only 22 senators to oppose the nomination of Chief Justice John Roberts, who never referred to either “original public meaning” or “originalism.” In fact, Roberts said only that he wanted to be known “as a modest judge, and to me that means … an appreciation that the role of a judge is limited.”

Are we now to believe that, as president, Biden has nominated a committed originalist?

Second, liberals have long opposed this “original public meaning” method of interpretation for the very reason that Jackson endorsed it this week: It limits what judges can do. The left-wing groups that strongly support, and even recommended, Jackson for this appointment would certainly oppose any Republican nominee who described his or her judicial philosophy in exactly the same terms.

In fact, more than 70 liberal groups signed a statement in November 2020 noting their opposition to President Donald Trump’s judicial nominees, many of whom were originalists.

They urged the Biden administration to shift the judiciary in the opposite direction, appointing judges who would advance “the administration’s priorities” such as “preserving protections for the Affordable Care Act, voting rights, women and reproductive rights, communities of color, LGBTQ communities, workers, the environment, consumers, and key civil rights.”

Today, these same groups strongly support, and even recommended, Jackson for this appointment despite her seeming embrace of the same “original public meaning” method of interpretation.

Third, in the Gorsuch hearing, Klobuchar pressed Gorsuch on whether he would follow the “original public meaning” approach in cases involving “equal rights for minority groups, women, LGBT, including transgender people, [or] racial minorities.”

The clear message was that Gorsuch’s judicial philosophy would interfere with what Klobuchar wanted the Supreme Court to do. Klobuchar, like 40 other current Senate Democrats, voted to filibuster and then to oppose Gorsuch’s nomination. This week, however, Klobuchar did not raise the issue of “original public meaning” with Jackson, who had described it in the same terms Gorsuch had.

So, we are really no closer to identifying Jackson’s judicial philosophy. By her own admission, she didn’t have one before this week, and there are serious reasons to doubt that Jackson’s embrace of originalism this week accurately previews how a Justice Jackson would approach her cases.

That leaves the likelihood that the Biden administration and its liberal allies have indeed found the kind of justice they were looking for all along.