What You Need to Know About Judge Ketanji Brown Jackson 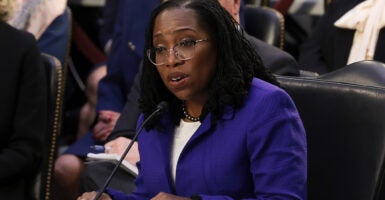 Ketanji Brown Jackson may soon become the newest justice of the Supreme Court. Her Senate Judiciary Committee hearing began Monday. Democrats praised the historic nature of her nomination and Republicans raised concerns over her record.

But who is Ketanji Brown Jackson? How would she rule on critical cases if confirmed to the Supreme Court? Will she uphold the Constitution?

On today’s episode of “The Daily Signal Podcast,” we share a conversation from Heritage Foundation podcast “SCOTUS 101,” hosted by Zack Smith and GianCarlo Canaparo. They sit down with Carrie Severino of the Judicial Crisis Network, Ed Whelan of the Ethics and Public Policy Center, and John Malcolm of The Heritage Foundation to discuss Jackson’s judicial philosophy. They also explain how Republican senators should handle questions during her confirmation hearing, and what we can learn from her rulings on past cases.