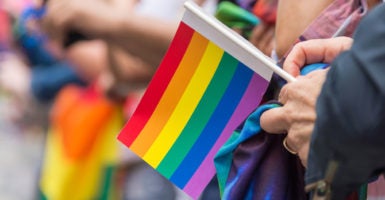 "It is a fundamental belief of mine that all people are created in the image of God and should be treated with dignity and respect,” 9th Circuit nominee Lawrence VanDyke says while defending himself against charges that he would treat LGBT litigants unfairly. (Photo: Marc Bruxelle/EyeEm/Getty Images)

Lawrence VanDyke, one of President Donald Trump’s nominees for the 9th U.S. Circuit Court of Appeals, was overcome with emotion before the Senate Judiciary Committee on Wednesday as he defended himself against charges that he would treat LGBT litigants unfairly.

The American Bar Association issued a scathing review of VanDyke’s nomination on the eve of Wednesday’s hearing, finding he was unqualified for the federal bench based on several factors, including possible prejudice.

“Mr. VanDyke would not say affirmatively that he would be fair to any litigant before him, notably members of the LGBTQ community,” the letter reads. It elsewhere accused VanDyke of arrogance and closed-mindedness.

“I did not say that,” VanDyke told GOP Sen. Josh Hawley of the ABA’s charge. “I do not believe that. It is a fundamental belief of mine that all people are created in the image of God and should be treated with dignity and respect.”

The ABA evaluator who interviewed VanDyke, Marcia Davenport, contributed to one of VanDyke’s opponents during his failed 2014 bid for the Montana Supreme Court.

Hawley and other Republican lawmakers criticized the ABA’s privileged position in the judicial nominations process. The White House typically makes its nominees available for interviews with ABA evaluators, who issue assessments on a scale of “well qualified,” “qualified,” or “not qualified.” Those evaluations are based on interviews with lawyers and judges with whom the nominee has practiced.