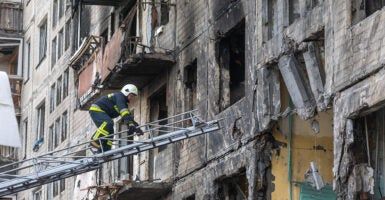 Nonprofits in Ukraine and surrounding countries ask for assistance in providing medical supplies, clothes, and food to those affected by Russia's invasion. Pictured: A firefighter enters a badly damaged building in Kyiv on Monday. (Photo: Mykhaylo Palinchak/SOPA Images/Getty Images)

As Russian troops continue their onslaught against Ukraine, nonprofits on the ground are asking for support to aid both refugees and those suffering within the borders of their homeland.

In a remote address to Congress on Wednesday, Ukrainian President Volodymyr Zelenskyy asked for more U.S. assistance as nearly 600 civilian deaths have been confirmed in his country.

Since Russia’s Feb. 24 invasion, the United Nations estimates that 3 million out of Ukraine’s population of 44 million have fled the country.

Three U.S. nonprofits shared details of their experiences and efforts within Ukraine and neighboring countries as they provide lifesaving aid.

The Knights of Columbus, an international Catholic fraternal organization, pledged solidarity with thousands of Ukrainian members, their families, and others in need of aid, as well as members in neighboring Poland, where many Ukrainians have fled.

“Knights of Columbus is uniquely situated to help Ukraine. We have members and councils on both sides of the Polish and Ukrainian border,” Szymon Czyszek, the Knights’ director of international growth, said in a press call. “From the beginning of the war, we [sent] a truck full of supplies, medical supplies, food, clothing, and other necessities that thousands of refugees needed as they fled eastern and central Ukraine towards western Ukraine.”

As the Russian invasion progressed, the Knights of Columbus established a Ukraine Solidarity Fund to provide aid for those in need. To date, the organization has raised more than $6 million in donations, of which 100% goes directly to Ukraine.

Czyszek said the Knights of Columbus established “Mercy Hut,” modeled on resource centers from World War I, where everyone was welcome and everything was free for refugees. The huts, situated along the Polish-Ukrainian border, provide food, water, and warmth to new arrivals.

These arrivals are often in extreme distress after leaving their homes “at a moment’s notice,” Czyszek said.

Czyszek, who is in Poland, said that fleeing Ukraine is a “very risky undertaking” for women and children, who often have to leave husbands and fathers behind who intend to fight.

Although he was amazed by, and thankful for, the support demonstrated for Ukraine, “the effects of the aggression will be long term,” Czyszek said.

Founded in response to the 9/11 attacks, Spirit of America is the only congressionally approved nonprofit that works alongside troops to support their missions. The organization started a Ukraine Emergency Fund, which sends 100% of donations directly to help Ukrainians.

CEO Jim Hake said Spirit of America’s mission is to promote American values across the globe by protecting free people wherever they are threatened.

“The fight in Ukraine is not only about Ukraine. It’s not only about the soldiers and regular civilians that are fighting the Russians,” Hake said at a briefing. “This is in a much broader sense about defending freedom and democracy against the greatest threat since World War II. The ripple effect of what happens in Ukraine, whether for good or for ill, will be enormous.”

“We are working directly with the U.S. military and diplomatic teams here to move aid into Ukraine, specifically bulletproof vests, helmets, individual first aid kits … which will get delivered directly into the hands of those who need it right now,” Denny said. “We’re able to do this because we’re not neutral. We’re taking a side, and we’re taking the side of the Ukrainians who are fighting … not only for their country, but for democracy at large.”

Denny said refugees in Poland and other countries are “relatively well cared for” by other aid organizations, but there is a shortage of aid to Ukrainians who are fighting within their country:

We assess that the gap is getting aid into Ukraine, and specifically, to get aid into the hands of the Ukrainians who are serving in the armed forces and the civilian Ukrainians who have stepped up and joined the newly formed Territorial Defense Force, which is the civilian volunteer service that is over 100,000 Ukrainians strong and growing by thousands a day.

Dave Philips, deputy director of international projects for Samaritan’s Purse, said the organization’s efforts so far have helped more than 20,000 persons affected by the war in Ukraine.

Philips said Samaritan’s Purse has focused on “providing relief both spiritually and physically” to those remaining in Ukraine.

“Even though there are almost 3 million people that have been displaced, because of the fighting, outside of the country, there’s many more—some estimate up to almost 7 million—inside of Ukraine who have been displaced from their homes, but they’re still inside the country,” Philips told The Daily Signal in a phone interview.

Philips said many Ukrainians are still in a state of shock from being torn away from their families and are uncertain about the future.

“We’ve gotten these anecdotal stories of people having to melt snow for drinking water,” he said. “It’s cold temperatures down into the single digits, middle of winter. So, we’re seeing a need for hygiene kits, for drinking water, for medical attention, both for the needs of the trauma that comes from war, but also for people that are having to flee so quickly and leave.”

Amid the horrors of war, Philips said, he has been encouraged by prayers and donations toward humanitarian efforts in Ukraine.

“It is such a terrible thing to see all the suffering. But at the same time, we’re seeing an incredible outpouring of love and of goodwill towards the people of Ukraine,” he said. “And we are trying to do what we can to stand in solidarity with them as we watch the pain, but also know that we want to be God’s hands and feet of love in the midst of all that crisis.”