Russia’s Claim of Chemical, Bio Labs in Ukraine Is a Ruse 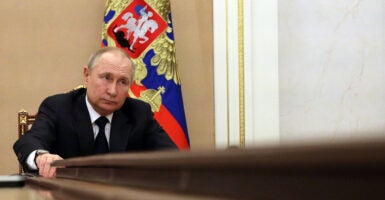 Russia is circulating the spurious claim that Washington and Kyiv are working together to develop chemical and biological weapons. Pictured: Russian President Vladimir Putin chairs a meeting with members of the Russian government via teleconference in Moscow on March 10. (Photo: Mikhaul Klimentyev/Getty Images)

In the latest in a series of specious and outlandish justifications for its illegal, immoral, and brutal invasion of sovereign Ukraine, Russia is claiming that Washington and Kyiv are working together to develop chemical and biological weapons.

Indeed, according to the U.S. State Department this week:

On the other hand, the State Department notes:

Russia has also shamelessly supported the regime of Syria’s Bashar Assad, which has used a variety of chemical weapons against Syrian civilians in the brutal civil war there.

To do this, Moscow might develop a “false flag” operation, involving the use of chemical (or less likely biological) weapons in Ukraine against Russian forces, ethnic Russians in Ukraine, or even Ukrainian civilians.

The attack could possibly be choreographed to look like it was supposedly executed by Ukrainian forces.

An even more elaborate Russian operation might try to finger U.S. or NATO forces, rather than Ukrainian forces, as being the perpetrators of such a heinous act, which would almost assuredly include examples of those supposedly killed by the weapons.

Such a contrived act would likely take place on Ukrainian territory currently controlled by Russian forces, such as the eastern Ukrainian region of the Donbas.

The false flag operation could be used to “change the channel” on Russian brutality in Ukraine in the international information space. Indeed, the Chinese are reportedly parroting this Russian propaganda about weapons labs.

A false flag operation could also be used to burnish the image of the Russian armed forces at home, where the Russian people are being fed a steady diet of propaganda about the Ukraine invasion.

Even more troubling, the false flag operation could be used to justify an escalation in the use of force and violence in Ukraine.

Based on Biden administration statements, likely supported by U.S. and other intelligence, the Kremlin would use any trick in the book to justify its unjustifiable war in Ukraine—including the use of weapons of mass destruction.