Ukraine Needs Our Help, but No-Fly Zone Should Be Off Table 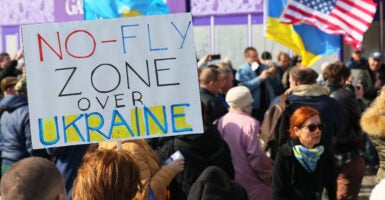 People rally in support of Ukraine on March 6 in a Russian neighborhood of the Brooklyn borough of New York City as Ukrainian President Volodymyr Zelenskyy continues to ask NATO to establish a no-fly zone over his country amid the Russian invasion. (Photo: Michael Santiago/Getty Images)

The situation in Ukraine is heartbreaking to watch. Russian President Vladimir Putin, a despotic thug, has waded headlong into an all-out invasion of that country, and his army is using Soviet-era tactics with little regard for collateral damage or civilian casualties.

Watching the carnage unfold in near-real time is infuriating, and people around the world are calling for action. Ukrainian President Volodymyr Zelenskyy, for example, is pleading with the West to clear Ukraine’s skies of Russian aircraft and take that unfettered advantage away from Putin.

In other conflicts, the United States dominated the skies over Iraq, Afghanistan, Libya, and Syria, which gave us an incredible operational advantage. Ukraine presents a different scenario entirely.

Unlike the dated jet fighters and air defense capabilities possessed by Third World adversaries, Putin’s arsenal of weapons includes a vast array of modern fighters, arguably the best surface-to-air missile system in the world, and thousands of strategic and tactical nuclear weapons.

Putin would view an attempt to establish a no-fly zone as an act of war and begin employing every conventional asset at his disposal to defeat the effort, including SAMs based in and outside of Ukraine.

Establishing a no-fly zone would necessitate taking those systems out, and once the shooting starts, there’s little doubt that allied losses would be anything but insignificant.

Even if we were able to pull it off and box him in militarily, a cornered Putin would be more prone to employ the nuclear weapons under his control. The engagement calculus is much more complicated, and the stakes are much higher here than in any other operation we have executed since the end of the Cold War.

There’s little doubt that those advocating a no-fly zone do not understand the risks—or the inherent escalation—such an effort would cause. And while the United States would embrace those risks to uphold our commitment to NATO nations, or to defend our vital national interests, the situation in Ukraine does not meet those thresholds.

Still, Zelenskyy needs our help and, with a no-fly zone off the table, giving Ukrainian pilots more fighter aircraft to employ against the Russians appears to be the next-best alternative. However, the complications of such a move are much more involved than first meets the eye.

Ukrainian fighter pilots fly the MiG-29s and Su-27s, both primarily air-to-air fighters, as well as the ground attack Su-25. While transitioning to fly a different aircraft like the A-10 might seem like it would be easy, it is anything but. Flying any modern fighter in a benign environment at medium altitude is easy by design, but max-performing jets at treetop level is incredibly demanding.

The electronic and radar countermeasures that help pilots defeat SAMs vary widely among fighters, as do the jets’ handling characteristics. Pilots need to know both so well that they do not have to think about either while employing weapons in proximity to Russia’s best SAM system, the S-400.

With no other electronic warfare support, Ukrainian pilots need to fly as low as they can to defeat that system. Successfully employing “in the weeds” can only come through repetition and time in the air.

Training pilots on a new jet would take several weeks at a bare minimum to gain that kind of competency, but training maintenance technicians and weapons loaders how to operate, maintain, and arm those fighters would take several months, if not more—months Ukraine may not have.

That narrows the ideas for gifting fighters to just two—more MiG-29s and Su-25s, and there are several partner nations in the region that are currently flying those jets. Poland has some 28 MiG-29s, Slovakia has seven, and Bulgaria has 13 MiG-29s and eight Su-25s.

On Tuesday, Poland announced its intent to transfer its fleet of MiG-29s to the United States by flying them into Ramstein Air Base in Germany. From there, the jets can be shipped or flown directly into Ukraine.

Once on the ground, the Ukrainian Air Force’s maintenance and weapons personnel can turn the jets without missing a beat, and their pilots can begin employing them right away. No doubt this deal includes a bevy of weapons and spare parts required to keep those birds in the air, which is equally significant.

Poland’s generous offer was accompanied with its encouragement for Slovakia and Bulgaria to follow suit, and while it sounds easy, giving up operational fighters in the face of a very real Russian threat is no small move, as any deal to receive replacement jets will likely take years to manifest, leaving an equally large capability gap for the donor nation.

While Poland’s encouragement may get Ukraine even more MiG-29s, the weight of each nation’s decision will be significant and any nation choosing to donate their jets will likely ask for and receive palatable security guarantees, such as basing U.S. fighters within the donor nation.

While this is a very significant move for Ukraine, the United States needs to continue to ship as many Javelin anti-tank missiles and Stinger anti-aircraft weapons as it can to help that nation beat back the Russians. It should also consider adding compatible SAM system components and replacement missiles for Ukraine’s S-300 SAM batteries—and to give them as much real-time, detailed intelligence as it can.

While some may argue that sharing intelligence will compromise sources and methods, the State Department reportedly shared classified intelligence with China in a vain attempt to get Beijing to intervene with Russia before it invaded. If we can do that with a peer adversary, why would we not share it with our friends in Ukraine?