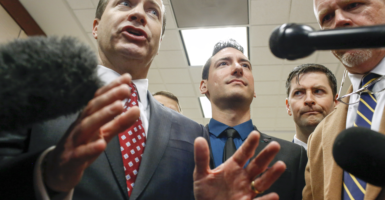 Daleiden posed as a fetal tissue procurer and secretly recorded and published videos in 2013 and 2014 of Planned Parenthood employees discussing the alleged sale of fetal body parts.

“The state of California is criminalizing investigative journalism, and attempting to suppress evidence that would exculpate Mr. Daleiden from these groundless charges,” attorneys Steve Cooley and Siannah Collado said in a statement Friday evening.

The testimony excluded is that of former Orange County District Attorney Tony Rackauckas, according to the filing. Rackauckas acted on Daleiden’s findings and brought an action against both DaVinci Bioscience and DV Biologics, which paid $7.8 million and closed their businesses.

“Mr. Rackauckas declares that Mr. Daleiden provided him with evidence of violent crimes and that his office specifically found evidence of ‘infanticide, of partial birth abortions, of felony battery and of the illegal sales of fetal tissues and organs,’” the filing says.

Since Rackauckas has said that without Daleiden’s reporting this would not have occurred, Daleiden’s attorneys argue that this establishes the pro-life activist’s recordings as legal under California law.

But the attorney general has denied that Daleiden found evidence of violent crimes and “castigates Mr. Daleiden as an agent provocateur who sought only to damage Planned Parenthood,” according to the filing.

“Mr. Rackauckas’ testimony would be extremely relevant to Mr. Daleiden’s credibility and character concerning his search for violent crimes,” the filing says. “In addition, there is probably no greater expert on what constitutes evidence of all crimes than the five-term district attorney of Orange County, Tony Rackauckas.”

Rackauckas’ testimony would be exculpatory to the charges against Daleiden, the attorneys argue.

‘Designed to Elicit an Emotional Response’

The prosecution has also argued that some evidence should be excluded because it is irrelevant testimony designed to elicit an emotional response.

Planned Parenthood officials who testified had described baby body parts and organs at length, the documents said, but the attorney general’s request to prohibit certain terms and references would “prevent both defendants and their counsel from characterizing the evidence as they see fit.”

“Dr. Theresa Deisher testified that only live hearts, hearts that have not contracted into rigor mortis, may be placed on the Langendorff perfusion machine in order to maintain their function,” the filing says, noting that Deisher had testified that “in order to obtain beating hearts babies would have been born alive before their hearts were harvested.”

“Dr. Forrest Smith testified that common second-trimester abortion procedures in which cervical preparation is accomplished with large doses of Misoprostol, practiced by the Does in this case, would result in babies born alive,” the filing continues.

The attorney general is thus “essentially” seeking a “gag order at trial concerning testimony and public statements,” the filing said.

The Stanford studies admitted into evidence at the preliminary hearing described purchasing numerous fetal hearts from StemExpress—with whom many of the Does worked and which Mr. Daleiden was investigating at the NAF 2014 tradeshow—and placing them on the Langendorff perfusion machine where they continued to beat. Hearts harvested from babies born alive are properly described as ‘baby body parts.’

While the prosecution is asking that certain evidence be withheld, the filing argues, it is at the same time requesting that evidence of “anti-aboriton violence at clinics and meetings” be included.

“This request is actually an attempt to put Mr. Daleiden and Ms. Merritt on trial for threats and violence perpetrated by other people,” the filing says, referring to Daleiden’s partner Sandra Merritt, who also shot undercover videos of Planned Parenthood employees. “The defendants never threatened anyone and face no such charges in the information. There is no nexus between the defendants and any threats or violence and therefore the AG has no basis for putting on evidence of uncharged crimes.”

“The [attorney general] wants this case presented as if [National Abortion Foundation] policies and procedures transformed the entire St. Francis Hotel into a private confessional, such that every word uttered by any attendee was confidential without regard to the facts and intentions surrounding the conversations between the Does and the defendants,” the filing says.

Daleiden’s legal representation argues that there is “no dispute that novelty identifications and a legally organized company, BioMax, were employed to enter the conference,” referring to Daleiden’s fake fetal tissue procurer company.

The filing states that the only dispute is whether Daleiden purposefully recorded confidential communications or whether the conversations, which took place in public spaces where anyone could have overheard them, “were reasonably intended by the Does, not by NAF, to be confined to themselves and the defendants.”

Planned Parenthood accused Daleiden of deceptively editing the videos and sued Daleiden and his organization, the Center for Medical Progress, in March 2016.

In March 2017, former California Attorney General Xavier Becerra filed an arrest warrant detailing 15 criminal charges against the pro-life activist. Becerra has since assumed the role of secretary in the U.S. Department of Health and Human Services.

In a defamation lawsuit filed in November 2019, Daleiden alleged that Dr. Savita Ginde, formerly the vice president and medical director at Planned Parenthood of the Rocky Mountains, lied about Daleiden and the Center for Medical Progress in both a December 2018 book and in a December 2018 TEDx talk.