With Future of Roe v. Wade Unknown, Pennsylvania in Battle for Unborn 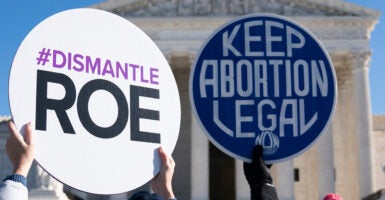 If Pennsylvania lawmakers don’t ensure that life is protected by the state constitution, a pro-life lawyer says, “we could actually end up in a world where abortion is more extreme in Pennsylvania.” Pictured: Pro-life and pro-choice activists demonstrate Jan. 22 outside the U.S. Supreme Court. (Photo: Alex Edelman/AFP/Getty Images)

A battle is raging in Pennsylvania for the lives of unborn babies.

If laws aren’t in place to protect the unborn, “we could actually end up in a world where abortion is more extreme in Pennsylvania” should the Supreme Court overturn Roe v. Wade, Jeremy Samek, senior counsel for Pennsylvania Family Institute, told The Daily Signal during a phone interview Thursday.

State Sen. Judy Ward has proposed an amendment to the Pennsylvania Constitution that, in her words, would ensure it includes “no right to an abortion or abortion funding.”

The Pennsylvania Senate Health Committee voted to advance the bill at the end of January. Now it must pass through the state House and Senate in two consecutive sessions.

The two chambers of the state Legislature operate in two-year sessions, and both must pass the proposed constitutional amendment during the 2021-2022 session and then again in the 2023-2024 one.

If the pro-life amendment passes in both sessions, it will go to the ballot for a vote by Pennsylvanians.

Pennsylvania law doesn’t require the governor’s signature for constitutional amendments, so Gov. Tom Wolf, a Democrat, would not have the power to veto the bill, nor would a future governor.

Pennsylvania Family Institute’s Samek says he is optimistic that the pro-life amendment will pass because Republicans control both the House and the Senate.

That passage is critical, Samek said, because “we could wake up on July 1 and see that Roe v. Wade was wrongly decided and [Planned Parenthood] v. Casey was wrongly decided, and so the federal abortion jurisprudence gets kicked back to the states.”

But if lawmakers don’t ensure that life is protected by the state’s constitution, Samek said, abortion could become more prevalent.

State lawmakers introduced the pro-life measure in light of the forthcoming Supreme Court ruling in Dobbs v. Jackson Women’s Health Organization, but also because the abortion industry in Pennsylvania actively seeks to ensure a right to abortion across the state.

In 2019, a group of Pennsylvania abortion clinics, including those of Planned Parenthood, filed a lawsuit against the state with the aim of striking down Medicaid restrictions on taxpayer funding of elective abortions.

The abortion clinics also are asking the court to “declare a right to abortion and a right to taxpayer funding of abortion in the Pennsylvania Constitution,” Ward said in a memo accompanying the bill.

“If the court declares such rights, all of Pennsylvania’s laws that protect the life and health of mothers and preborn children by regulating abortion are in danger of being subsequently struck down,” he wrote.

The Pennsylvania Supreme Court has agreed to take up the case filed by the abortion industry, but has not yet scheduled arguments.

“What the abortion industry is asking the Pennsylvania Supreme Court to do,” Ward said in her memo, “is to bypass both the legislative process and the constitutional amendment process and to manufacture out of thin air a right to elective abortion and taxpayer funding of elective abortion, presumably during all nine months of pregnancy.”

Under current law, Pennsylvanian limits abortion after 24 weeks of pregnancy. All of the state’s pro-life legislation may be at risk if the state Supreme Court rules that the state constitution includes a right to abortion, the Family Institute’s Samek said.

At this moment, “states need to be vigilant and pay attention,” Samek said, because the abortion industry would like to see every state across the country use taxpayers’ money to pay for abortion on demand throughout a 40-week pregnancy.

“It’s important to ensure that that doesn’t happen,” he said.