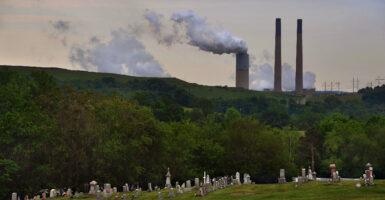 The Keystone Generating Station, a coal-fired power plant in Plumcreek Township, Pennsylvania—seen here in June 2017—has been targeted for closure by 2028, along with one and possibly two others, in pursuit of environmental goals, but their closures would result in killing hundreds of jobs in Western Pennsylvania. (Photo: Michael Williamson/The Washington Post/Getty Images)

Gordon Tomb is a senior fellow with the Commonwealth Foundation, a free market think tank based in Harrisburg, Pennsylvania.

Visible from Western Pennsylvania’s Allegheny Mountain ridges are coal-fired power plants—and their plumes of water vapor—that have been integral to much of the regional economy for 50 years. But maybe not for much longer.

Three plants east of Pittsburgh directly employ 550 people and support an estimated 8,100 jobs, according to Power PA Jobs Alliance, a coalition of labor and industry groups. Now, two of them—the generating stations of Conemaugh on the Indiana-Westmoreland County border and Keystone in eastern Armstrong County—are slated to close by 2028.

The owners blame costs imposed by the U.S. Environmental Protection Agency’s wastewater rule. The regulation is expected to lead at least 26 plants in 14 states to stop using coal, according to news reports. Another factor is Pennsylvania Gov. Tom Wolf’s unilateral decision to join the Regional Greenhouse Gas Initiative.

“These plants have sunk billions of dollars into environmental projects,” said Ken Umholtz, a Conemaugh employee commenting on the EPA’s concern about water quality. “We no sooner finish one thing, and it’s something else.”

Though the Conemaugh plant recycles most of its water, Umholtz said, “Environmentalists … plan to regulate us out of business, but they are not going to have electricity because there is nothing to replace us.”

Conemaugh and Keystone each generate 1,800 megawatts of electricity. A third coal-fired plant at Homer City produces 2,000 megawatts and, so far, plans to continue operating. The three together can power more than 5 million homes.

“The only readily available energy source to make this much electricity is coal,” said Allen Goldberg, chief operating officer for General Trade Corp., a contractor that manages materials trucked to the plant, including some of the millions of tons of coal.

“There are basic laws of physics that apply to everything in life,” said Goldberg. “One of them is that you can’t just shut down something like this without replacing it.” He added that the area lacks pipeline infrastructure to supply natural gas as an alternative fuel for the plant.

Allan Manning unloads rail cars, which transport the bulk of the plant’s coal. At age 35, he hopes to finish his working life at Conemaugh, but wonders if that will be possible.

“Three generations of my family have been raised with the help of these plants,” said Manning, whose grandfather, father, and uncle worked as tradesmen in operating, maintaining, or building power plants. “My wife and I have raised two daughters—ages 8 and 6—with her being able to stay at home with them. We could not have done that without the salary I make at the plant. There are thousands who depend on these plants for a living.”

According to Manning, plant closings could diminish the local tax base, and directors of the local school board “think they would have to lay off teachers.”

Most plant employees are members of the International Brotherhood of Electrical Workers Local 459—a union based in nearby Johnstown. Aric Baker, a Local 459 senior business representative, wishes his parent union was more vocal about regulations threatening the plants. However, he said, the IBEW hierarchy has “to dance around” the politics of having members employed at competing nuclear plants.

“It’s very frustrating because so much of Local 459’s membership is tied to fossil fuels,” said Baker, who is also an air-emissions technician at Keystone. Of the local’s 2,000 members, nearly 40% work at coal plants or on power lines.

The cost of the EPA’s rule would not be as large of a concern for the plants if it weren’t for the threat of Wolf’s insistence on joining the Regional Greenhouse Gas Initiative this year, Baker said. That initiative amounts to a carbon tax that would increase the cost of the plants’ electricity and make it less competitive. Wolf has vetoed a legislative resolution to prevent the state from joining the Regional Greenhouse Gas Initiative and has sued in Commonwealth Court to force the tax into immediate effect.

Pennsylvania is the top exporter of electricity among states, a rare instance of economic leadership for the state. Chasing out power producers with punitive taxes and regulations only feeds poor economic rankings in other areas. Pennsylvania has the nation’s 15th-highest unemployment rate, according to the Bureau of Labor Statistics, and ranks 44th on Multistate’s Open-for-Business Index.

“It doesn’t make sense to shut down prematurely coal plants that provide the security of on-site fuel storage and an alternative when prices of natural gas and other sources spike or when other resources are unavailable,” said Michelle Bloodworth, CEO of America’s Power, an industry trade group.

Coal plants, Bloodworth said, were among the most reliable energy sources during a massive power outage in Texas and neighboring states last February. According to a federal report, coal-fired plants accounted for less than 6% of the outages while natural gas and wind plants accounted for 58% and 27%, respectively.

“If these plants are shuttered, there will be blackouts,” said Baker. “I bought a home generator two years ago, and I’m no tin-foil-hat doomsdayer. I just know the reality of the situation.”