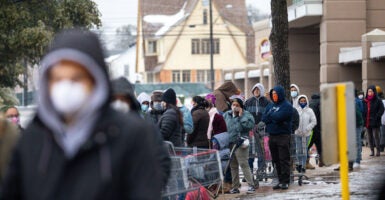 Millions of Texans have been left with no power after severe weather caused mass outages. Pictured: People wait in long lines at a grocery store in Austin, Texas, Wednesday. (Photo: Montinique Monroe/Getty Images)

February gave Texas the cold shoulder this weekend as an extreme winter storm pounded the entire state. As of this morning, power had not been restored to more than 4 million Texans.

Hundreds of thousands have also lost water after the water treatment plants in Fort Worth, Abilene, and elsewhere suffered power outages. A handful of deaths from the cold have already been reported, although we may not know the true toll until the state digs itself out.

Prolonged power outages are always life-threatening for the sick and elderly, but are made worse by freezing temperatures.

In subtropical Houston, temperatures dipped into the teens, while temperatures around Dallas plunged toward zero this morning. Residents have reported temperatures inside their homes are in the 30s and 40s, and they still have no power.

Economically speaking, the catastrophe was caused because power demand peaked as power production plummeted. But what role did lack of preparation and an over-reliance on so-called green energy play?

The state had planned to implement 45-minute, rolling blackouts—because those always work so well for California—but was forced instead to cut power to entire regions for extended periods.

If you believe NPR, most of the outages are at “facilities run by gas, coal or nuclear energy,” a narrative it has repeated over and over. Those reports are “false,” according to the Texas Public Policy Foundation. It pointed out gas, coal, or nuclear power plants work just fine in parts of the world much colder than Texas.

The real problem, it said, is the state’s reliance on nearly 20,000 megawatts of wind and solar power. Wind power generation bottomed out at 2%, creating a system failure that knocked other plants offline, too.

The Center of the American Experiment calculated that, during freezing conditions, wind turbines are a net loss of power because even when they are unable to produce power, they have to consume it to run electric heaters to keep the oil in their housing from freezing.

The lesson here is that green energy production is least available when it is needed most. Even if, by some miracle, America achieves 100% renewable energy production, we will need gas, coal, and nuclear-generated power as a backup for when wind and solar generation inevitably goes offline.

Advocates believe that renewable energy can be stored in batteries to be used when needed, but the Texas Public Policy Foundation said batteries are an “impractical and expensive” solution. In Texas alone, it estimates the state would need more than 1,000 times its current battery capacity.

While Americans slowly freeze in their homes, President Joe Biden in his first month in office has already aggressively restricted the fossil fuels that could keep them warm. He has revoked the Keystone pipeline permit, restricted drilling offshore in Alaska, and closed public lands to fracking. All this is done with an eye toward expanding green energy production.

In fact, White House climate czar John Kerry inanely suggested pipeline workers who lost their jobs could make solar panels. But when energy matters most, renewables just can’t cut it. Americans will be forced to rely on foreign dictators to export the oil that will heat their homes.

This is simply unacceptable. There is little chance that Americans will warm up to Biden’s environmental policies.