2 Senators Flip-Flop on Keystone XL Pipeline, Thwarting GOP Bid to Save It 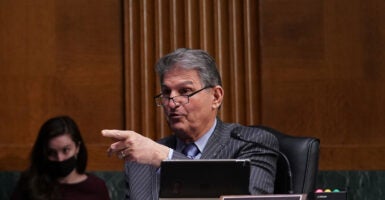 Sen. Joe Manchin, D-W.Va., seen here at a Senate Veterans' Affairs Committee hearing on Jan. 27, was for the Keystone XL oil pipeline before he was against it. (Photo: Sarah Silbiger/Getty Images)

Two Democratic senators—Sens. Joe Manchin of West Virginia and Jon Tester of Montana—who initially voted in favor of a Republican amendment reversing President Joe Biden’s cancellation of the Keystone XL pipeline later reversed themselves and voted with other Democrats to kill the amendment.

Both Tester and Manchin voted late Thursday night for the amendment from Sen. Steve Daines, R-Mont., that would have reversed Biden’s Jan. 20 executive order ending further construction of the Keystone XL oil pipeline, but changed their votes before dawn on Friday morning.

Daines’ amendment was attached to a COVID-19 relief bill and initially passed 52-48, but after Manchin and Tester switched sides, Vice President Kamala Harris cast the tie-breaking vote to kill the amendment on a straight party-line vote.

An angry Daines tweeted Friday morning, “Early this morning, while the American people were asleep, Senate Democrats chose to flip-flop on their support for my Keystone XL pipeline amendment, as well as @SenatorBraun’s amendment to support fracking.” Sen. Mike Braun is a GOP lawmaker from Indiana.

The canceling of the Keystone XL pipeline is projected to kill 11,000 jobs, 8,000 of them union jobs, as The Daily Signal previously reported.

Daines tweeted that Manchin and Tester “chose to stand with Green New Deal radicals over American jobs & blue-collar workers. They chose to stand against tax revenue for counties & low energy costs for families. Montanans & the American people will know where they stand. But also know this, I won’t stop fighting.”

The last-minute vote switch is especially surprising from Manchin, who had said publicly Tuesday that he disagreed with Biden’s directive.

“Well, at the bottom line, I disagree. I respectfully disagree with the president and the executive order on doing away with the Keystone pipeline,” Manchin said on Fox News.

“I’ve seen a train blow up in West Virginia carrying that crude. I’ve seen tanker cars explode going through towns. It’s much safer in that pipeline than it is coming across the road or the rail. If they think they’re going to stop that product, that’s a heavy crude we need in our refineries,” he said.

As of late Friday afternoon, neither Manchin nor Tester had explained why they changed their votes.