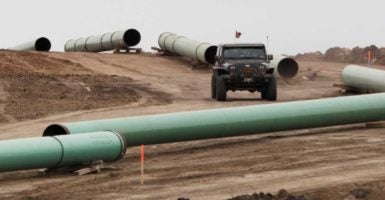 President Donald Trump signed a pair of executive orders to move forward with two major pipelines blocked by the Obama administration, but with the caveat the U.S. would “renegotiate” the terms of building the projects.

“It’s subject to a renegotiation of terms by us,” Trump said before signing an executive order on the Keystone XL oil pipeline. “We’re going to renegotiate some of the terms, and, if they’d like, we’ll see if we can get that pipeline built.”

The Dakota Access oil pipeline’s construction was also “subject to terms and conditions to be negotiated by us,” Trump said before signing his second executive order on pipelines Tuesday.

One of those conditions is pipelines must be built with U.S.-produced steel, Trump said. Union leaders met with Trump Tuesday morning.

The former administration blocked the Dakota Access oil pipeline in November 2016, after environmentalists and American Indians protested for months to block the pipeline. Activists argued the pipeline would impact Standing Rock Sioux sacred tribal sites—though they produced little evidence of this.

Environmentalists were furious with Trump’s pipeline executive orders, but supporters argue it will be better for jobs and the environment to build more pipelines.

“Multiple studies have shown that the Keystone XL pipeline is a job creator and would limit our dependence on foreign oil and transported oil in the most environmentally-friendly way possible,” West Virginia Democratic Sen. Joe Manchin said in a statement.

Keystone XL would bring 830,000 barrels of oil sands per day from Alberta, Canada, to U.S. refineries along the Gulf Coast.

Obama vetoed legislation, co-sponsored by Manchin, in 2015 approving the pipeline before rejecting the project outright later that year.

“The pipeline will help us reach these goals as we partner with one of our strongest allies, Canada,” Manchin said. “With a majority of Americans in support of the Keystone XL pipeline’s construction, I’m glad we are finally moving forward with this important project.”

This article was originally posted by The Daily Caller News Foundation.