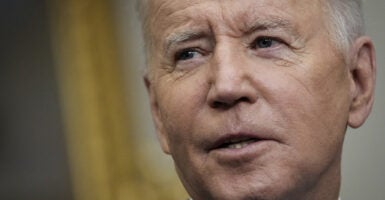 The same week the Supreme Court takes a case to decide if race-based college admissions are lawful, President Joe Biden declares his next Supreme Court justice pick will be based on race and sex. Pictured: Biden speaks about the retirement of Justice Stephen Breyer. He has promised to nominate a black woman to take his place. (Photo: Drew Angerer/Getty Images)

The cases will be jointly argued during the next Supreme Court term, and they place directly in their crosshairs the court’s noxious precedents in the thorny area of race-conscious university admission policies.

As presented to the court, the leading question the justices will consider is “whether the Supreme Court should … hold that institutions of higher education cannot use race as a factor in admissions.”

The court should of course do so posthaste. The propagandist assertion that America in the year 2022 is bedeviled by a sprawling, pan-institutional “systemic racism” is a destructive lie, but the ubiquity of affirmative action means that university admissions offices do, in fact, propagate systemic racism.

But by Wednesday afternoon, Monday’s propitious step forward toward an America no longer obsessed with race and identity politics was abruptly undermined by a severe step backward toward a race-centric polity. Justice Stephen Breyer, an octogenarian Jewish male and the senior statesman of the court’s liberal bloc, announced his retirement, effective at the end of this court term and contingent upon the successful confirmation of his successor.

The announcement was hardly surprising; given Breyer’s long-standing Democratic ties, his liberal jurisprudence, and the fact that Republicans are poised to retake control of the U.S. Senate this fall, it would have been more surprising if Breyer had not retired this year.

The more interesting twist came after news broke of the impending retirement: President Joe Biden affirmed that he intends to fulfill his 2020 campaign promise to nominate a black woman—not a black man, not a Hispanic woman, but specifically a black woman—to replace the retiring Jewish male justice.

There is only one way to describe crass identity politics operationalized at this high a political level: evil.

The nine justices of the Supreme Court are the most important jurists in the country. They swear an oath to uphold the Constitution and the American rule of law, which has the equality principle at its very core.

From the Declaration of Independence to the 14th Amendment to the Civil Rights Act of 1964, genuine equality under the law and an eschewing of the centrality of something as arbitrary as race has always been the American lodestar.

Americans have often fallen short of our enunciated ideals, but the equality ideal of race neutrality has often provided American statesmen succor during our darkest hours. For Abraham Lincoln, the equality-centric declaration was an “apple of gold” for which the Constitution was but an enveloping “frame of silver.”

Biden’s affirmation of his campaign-season promise to nominate such a specific population subgroup is a dagger to the telos—the overarching orientation of true colorblind equality and justice—of the United States.

Even holding aside the lunacy, from a sheer sample size perspective, of announcing at the outset of a Supreme Court justice search that one intends to limit that search to roughly 2% of the national lawyer pool, the higher-level message Democrats telegraph by doubling down on such an identity politics obsession is extraordinarily pernicious.

Furthermore, consider the impact Biden’s announcement surely has on young lawyers all across the nation who do not fit into the narrow sliver of the intersectional pie that he has now proclaimed will comprise his entire prospective talent pool.

And why stop at the intersectional sliver of black and female? Why not preemptively announce that his next two hypothetical court picks will be a Muslim and a homosexual, respectively? (Jews and Mormons, two religious minorities who nonetheless sit low on the left’s intersectional hierarchy pyramid, of course need not apply.)

The juxtaposition of the court’s colorblind certiorari grant on Monday and Biden’s color- (and sex-) centric announcement on Wednesday is nothing if not ironic. Perhaps Republicans might be galvanized to make opposition to identity politics a key part of their 2022 midterm election platform.

And regardless of who replaces Breyer, the court next term will hopefully take us closer to a society that is race-blind—and not besotted by cancerous identity politics—by gutting affirmative action in America.