Kristen Clarke Is Unfit to Be in Government 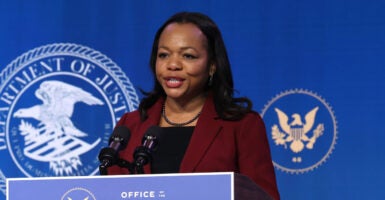 Kristen Clarke, President Joe Biden’s nominee for assistant attorney general of the United States, once promoted racist pseudoscientific quackery, arguing that the human brain was structured in a way that makes black people superior to white people, and that “human mental processes” in the brain have chemicals that imbue one race with “superior physical and mental abilities” and “spiritual abilities.”

Rather than owning up to a youthful relationship with radicalism, Clarke, who made these comments in The Harvard Crimson as a 19-year-old, claims that her racist diatribe was merely a parody mocking the controversial book “The Bell Curve.”

“What I was seeking to do was to hold up a mirror,” she says. “Put one racist theory alongside another.”

Purely by chance, Clarke also happened to invite a Holocaust-denying fraud named Anthony Martin—then a professor at Wellesley College whose assigned primary textbook was called “The Secret Relationship Between Blacks and Jews,” which blamed Jews for the slave trade, and who wrote “The Jewish Onslaught,” published by Nation of Islam leader Louis Farrakhan—to speak at Harvard.

Around the same time Clarke was writing unrecognizable satire about black supremacy, she was calling Martin an “intelligent, well-versed black intellectual who bases his information on indisputable fact.” Weird that.

Clarke’s contention that she was penning Swiftian letters on race is about as plausible as her assertion today in front of the Senate that her Newsweek op-ed, “I Prosecuted Police Killings. Defund the Police—But Be Strategic,” wasn’t about “defunding the police.”

Clarke said that “the impetus for writing this op-ed was to make clear that I do not support defunding the police.” In the piece, Clarke literally defines what “defund the police” means, and then offers her ideas about redistributing funds. Maybe that, too, was satire.

Clarke now says, “Let me be clear, I denounce anti-Semitism wherever and whenever it shows up.” Which would mean a lot more if she hadn’t signed a letter—not in 1999 but in 2019—supporting Farrakhanite Women’s March co-founder Tamika Mallory, who, according to Tablet, “asserted that Jewish people bore a special collective responsibility as exploiters of black and brown people—and even, according to a close secondhand source, claimed that Jews were proven to have been leaders of the American slave trade.” Mallory sounds a lot like Martin.

Indeed, there is not a single shred of contemporaneous evidence that her letter was satire. Quite the opposite. Subsequent pieces in the Crimson specifically point out that Clarke refused to concede that she wasn’t serious. The Harvard Crimson staff, in fact, demanded a retraction and noted that it had “searched in vain for a hint of irony in Clarke’s letter.”

In another response, a columnist argued that “Clarke refuses to explicitly deny the theories” and accused her of “disseminating racist theories.”

Now, all of us believe stupid things when we’re young—though perhaps not racial-science-level stupid.

It needs mentioning, though, that we live in a skewed world where a woman can be hounded out of her job at Teen Vogue for making jokes when she was 17, where The New York Times believes it’s newsworthy to track down the prom date of Josh Hawley for comment, and where Supreme Court nominees are attacked for jokes they made in their high school yearbooks. But somehow pointing out that the person put in charge of the Justice Department’s Civil Rights Division once spouted racist rhetoric, and now supports an anti-Semite, is beyond the pale.

If former President Donald Trump, or any Republican, had picked a nominee who had once promoted a Holocaust-denying white identitarian to an assistant AG position, there would—rightly—be a media meltdown.

Clarke has every right to live free and work where she can, but she has no God-given right to hold a position of power over citizens. With her history, she shouldn’t.