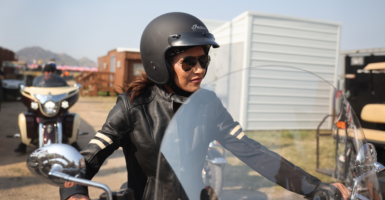 Gov. Kristi Noem arrives at the Sturgis Buffalo Chip campground after riding in the Legends Ride for charity. In a Thursday interview, Noem criticized President Joe Biden for his decision to pick a Supreme Court justice based on race and gender. (Photo: Scott Olson/Getty Images)

“I think that’s very unfortunate that he chose that approach,” the Republican governor said in a Thursday interview with The Daily Signal. “It almost divides people based on what they look like and their background, rather than just who’s the best person for the job?”

Biden said Thursday he would nominate the “first black woman” to the Supreme Court to replace Justice Stephen Breyer, who has announced his retirement.

The South Dakota Republican explained that she has worked in different roles and jobs her entire life, particularly in roles that many would consider a man’s profession, such as farming, ranching, and running a hunting lodge.

>>> Listen to the full interview with Gov. Noem on “The Daily Signal Podcast”:

“What mattered was working hard and doing the best job I possibly could do, and that’s what I would hope our president would use as qualifications for choosing justices on the Supreme Court as well,” Noem continued. “And ones who certainly want to uphold the Constitution, who love America, who recognize that their position in the high court is not to make laws, it is strictly to enforce the integrity of this country.”

Noem said she thinks it is wonderful for women to have plentiful opportunities to succeed and to have a level playing field.

“But I’ve never once asked for them to get special treatment,” she said. “I think that one of the great equalizers in this country is opportunity, and it should be open to everybody.”

The South Dakota governor introduced legislation in December that would codify her executive orders mandating that only biological female athletes can participate on sports teams designated for girls or women.

This legislation, which defines “biological sex” as “the sex listed on the student’s official birth certificate issued at or near the time of the athlete’s birth,” comes after the governor faced heavy criticism from conservatives for failing to certify a different bill banning biological males from women’s sports.

Noem told The Daily Signal Thursday that the original bill was “deeply flawed.”

“I’m a governor, you don’t sign bad bills into law that end you up in lawsuits that keep you from being able to take action when you need to,” she said. “Instead, you fix them, make sure they’re correct and appropriate, and that you literally can push forward the protections that are necessary.”

“I assigned two executive orders immediately that protected girls sports at the K-12 level, and then also at the college level, and said that when we got back into legislative session that I would be bringing the strongest bill in the country to put it into our statutes,” she explained.

“That is what we’re doing this year,” Noem continued. “We have a bill that I and my team have drafted that is very strong, keeps that protection in place that my emergency declaration, my executive orders did, and it’ll ensure that only girls play in girls sports here in South Dakota.”

Noem emphasized the importance of giving girls fairness and “a level playing field” where they can compete and be successful.

Asked if she feels conservatives once again have her back, Noem said that it depends.

“It’s a different, strange environment out there,” she said. “Liberals started attacking me with a vengeance because of my decisions on COVID. As soon as people started to see that it was working and how well we were doing here in South Dakota, I think some conservatives got competitive, or had friends that felt I was a threat in some way.”

“I try not to focus on that,” she said. “I’m thankful for their support, but I also know that it doesn’t matter who’s criticizing me, I need to make the right decisions, and I need to make the best decision based on what my job is, and not do more than what my authority is as governor, and give my people all the information that I can to help them get through any challenge that might come their way.”

There will always be criticism, Noem noted.

“I’m learning that in this job, but I’m just so thankful for the wonderful people I see every day that also give us their prayers and their encouragement and know our true hearts, that we do this because we love the states, and we love these people,” she said.