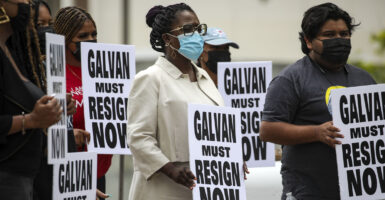 Three of six defendants have pleaded no contest to charges in an alleged voter fraud conspiracy in California that may have flipped an election hinging on one vote.

Los Angeles County Superior Court also will hold a hearing Wednesday in a separate civil case based on the same Compton city election to set a trial date.

In a June runoff election, Compton City Council member Isaac Galvan was reelected to the seat representing District 2, beating fellow Democrat Andre Spicer by 855 votes to 854 in the nonpartisan contest.

In August, prosecutors charged Galvan, 34, with election fraud and bribery.

Galvan, first elected to the Compton City Council in 2013, pleaded not guilty. The Daily Signal attempted to reach him for this report, but did not hear back from the councilman.

In the separate civil case, Spicer is suing to have Galvan’s election victory voided.

The incumbent’s one-vote margin, making it clear that suspected irregularities could have changed the outcome, sparked a prosecution that might have been overlooked, Spicer said.

“Fraud is a regular practice here,” Spicer told The Daily Signal, referring to Compton. “This is the first time it has gotten this far. He got arrested for fraud and bribery. That’s what put him up by one vote.”

Compton, located south of downtown Los Angeles, has a predominantly Hispanic and black population of about 96,500, according to the 2010 census.

The local case in California comes against the backdrop of a national debate over election integrity that has played out in multiple state legislatures and in Congress. This case specifically pertains to heightened scrutiny of mail-in voting and concerns about voter registration rolls.

In a separate case in November 2020, the Los Angeles County District Attorney’s Office charged two men with attempting to register 8,000 “fictitious, nonexistent, or deceased” people to obtain mail-in ballots for a mayor’s race in Hawthorne, California.

Prosecutors charged the two with 41 counts, including voter fraud, conspiracy to commit voter fraud, and procuring and offering a false or forged instrument.

“We hope a judge will overturn the election,” Spicer said of the civil suit challenging Galvan’s victory in Compton.

Regarding the criminal case, Spicer said of Galvan: “It appears he is going to fight. With three people pleading guilty, I don’t see he can win his case.”

Los Angeles County Superior Court will conven on Feb. 7 to set a preliminary hearing date in the criminal case.

Prosecutors allege that Galvan worked with former City Council candidate Jace Dawson, 34, to bring in at least four nonresidents to vote in the council race using Dawson’s address, which would be a felony.

A 13-page criminal complaint alleges that Galvan, in addition to conspiring to commit election fraud, attempted to bribe an employee of the Los Angeles County registrar’s office during the vote count with tickets to see the Mexican group Banda MS.

How Other Defendants Pleaded

Fellow defendants Kimberly Chaouch, 48; Toni Morris, 34; and Barry Reed, 61, each pleaded no contest to one felony count of registering a voter who is not entitled to vote, according to the office of Los Angeles County District Attorney George Gascón.

The sentencing hearing for the three is set for May 12, a spokesman for Gascón told The Daily Signal.

Besides Galvan and Dawson, a sixth defendant, Reginald Streeter, 51, also pleaded not guilty.

In August, Chaouch, Morris, Reed, and Streeter allegedly were registered to vote using Dawson’s address in Compton, although they didn’t live there. They were charged with voting illegally in the council election.

Spicer, the candidate who lost by one vote, told the Los Angeles Times that days after the election, Chaouch contacted his campaign staff to say she had “committed voter fraud.”

The newspaper reported that Spicer said: “They asked her, ‘What do you mean?’ And she said … she registered to vote from [Dawson’s] house and she knows about 20 other people who did the same thing.”

City officials have not been vocal since the initial charges were filed, Spicer told The Daily Signal.

“It hasn’t been talked about much. The city of Compton is not making an official statement until after the trial concludes, even though the citizens are crying out to do something,” he said.

The city’s charter doesn’t allow for a council member to be removed except for a criminal conviction, Spicer said. If that occurs, the council could appoint someone else to fill the seat, he said.

“Elections are the cornerstone of our democratic nation,” Gascón, the district attorney, said in a formal statement after the six were charged in August. “We must do everything in our power to protect the integrity of the electorate process and to ensure that elections are free and fair.”

“The people of Los Angeles County expect and deserve a government that is free of political corruption at every level,” he said.

California ranks 49th in the nation on The Heritage Foundation’s Election Integrity Scorecard on the strength of election laws.

On Nov. 14, 2020, according to the complaint, Dawson texted Morris—one of the three who later pleaded no contest—with a link to a news story that said, “Compton preparing to move to an all-mail election in 2021.”

But Dawson lost his bid for the District 2 seat on the Compton City Council in the primary election held April 20, 2021.

In an exchange of text messages seven days afterward, according to the criminal complaint, Dawson told Chaouch, who later also pleaded no contest: “Still a three way tie we are behind by two votes, but it’s all good.”

Dawson: “He requested me … But no conversation yet.”

Galvan and Dawson did reach one another on May 8, 2021, according to the criminal complaint, which says Galvan texted Dawson: “After the election maybe I can bring you on board to help me out. … There will be an opening.”

Dawson responded: “I will definitely be open to that.”

The two met May 10, according to prosecutors.

The complaint says that at least four individuals who lived outside Compton used Dawson’s address to register to vote in the city.

The text exchanges between Galvan and Dawson, produced by prosecutors, appear to try to make the case that the two wanted to collect enough votes to ensure that Galvan held onto his council seat in the runoff election in June.

On May 11, according to the complaint, Dawson wrote: “I have the ballads [sic] but they didn’t fill it out or sign it so I have to track them down to sign the ballot at least.”

Galvan texted back: “Alright, being [sic] them over when we link.”

The next day, Galvan texted: “When are you going to swing by?”

Dawson replied: “I’m waiting for them to sign. I have the ballots.”

The next day, May 13, Dawson texted Galvan: “OK, so this weekend maybe I will have the ballot signed[.] I still [sic] trying to get ahold of some people some ballots came and were left with no signature [sic].”

On May 17, according to the criminal complaint, Galvan sent a more blunt text: “Bring me the ballots. Let’s do this.”

Dawson replied: “You got it!!!!!! Yes got another one signed today.”

On May 21, Galvan asked by text: “Are you home? I want to drop off some ballots and I’m picking up some more tomorrow.”

Galvan texted Dawson a link to an agenda for  the May 25 meeting of the City Council. At that meeting, Galvan would move to appoint Dawson to a city liaison post, and the appointment would be approved by a council vote of 3-1 over the objection of then-Mayor Aja Brown.

Galvan replied: “You the man.”

The two met that day at City Hall, according to prosecutors.

Two days later, on May 25, Galvan texted: “703 ballots turned in for d2,” apparently referring to the District 2 council seat.

The two had another text exchange May 26, when Dawson wrote: “Got more people to vote. Also another Ballot … need three more lost ballot forms. … Just tracked down my neighbor who moved going to take her this paper that’s another Ballot. So I only have one empty sheet left.”

On May 28, prosecutors said, Dawson sent Galvan the Long Beach address of a woman who he said “was registered in Compton still” and “needs a paper ballot.”