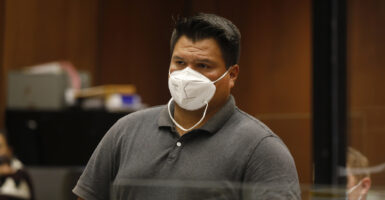 The U.S. Supreme Court said in 2008, when it upheld Indiana’s voter ID law, that “not only is the risk of voter fraud real but that it could affect the outcome of a close election.”

It seems we have a perfect example of this in Compton, California, where felony voter fraud charges have been filed against six defendants, including a member of the Compton City Council, Isaac Galvan, by the Los Angeles County district attorney.

Talk about a close election! Galvan won his City Council race in 2021 by only one vote, 855 to 854. Not only have all of the defendants been charged with conspiracy to commit election fraud, but Galvan is also accused of attempting to bribe an election official with concert tickets to “influence” the outcome of the election.

It is important to remember, though, that these are just charges and that all the defendants are presumed to be innocent at this stage of the proceedings.

According to the complaint that was filed on Aug. 13, and which the government will ultimately have to prove, four of the defendants registered to vote at the home of another defendant, Jace Dawson, who was also a candidate for the City Council, even though they didn’t live there, in order to vote in the election. Another defendant registered to vote at Galvan’s house despite also not actually living in Compton.

Dawson apparently saw an opportunity for mischief when Compton decided to have an all-mail election, responding to a text from another defendant giving him that news and saying Dawson should “come for that seat baby!” Dawson responded “Yeeeees absolutely!!!!”

Dawson lost the primary election in April to Galvan and then apparently conspired with Galvan to help Galvan win the June general election.

The texts outlined in the criminal complaint among the various defendants about their possession of the absentee or mail-in ballots of voters are disturbing. In one text, Dawson tells Galvan he has “the ballo[t]s but they didn’t fill it out or sign it so I have to track them down to sign the ballot at least.” Galvan responded by telling Dawson to bring “them over.”

In other words, Dawson apparently had possession of voters’ blank absentee ballots, giving him and/or Galvan the opportunity to fill them out with the votes they wanted. And this was not an isolated incident with one ballot.

One text has Galvan asking Dawson if he is home because Galvan wants “to drop off some ballots and I’m picking up some more tomorrow.” Another text from Galvan to Dawson in late May says, “703 total ballots turned in” for the June election. So there is no telling how many ballots may have been mishandled in the election.

The complaint outlines a text message between Galvan and Dawson that shows what the inducement may have been for Dawson to help Galvan win: “an unnamed city commission appointment.”

The allegations in this complaint and the text messages illustrate graphically why California made a huge mistake when it legalized voter trafficking, that is, allowing third-party strangers—candidates, campaign staffers, party activists, and political consultants—to pick up voters’ absentee ballots.

Giving those who have a stake in the outcome of an election—like Galvan and Dawson—the lawful ability to possess and handle ballots is simply asking for trouble and putting temptation in front of those who are willing to cheat to win an election.

Other examples of this type of wrongdoing are outlined in a study by The Heritage Foundation, released last year, that summarized what happened in four absentee ballot fraud cases, including another one in California: “Four Stolen Elections: The Vulnerabilities of Absentee and Mail-In Ballots.”

Registration fraud as alleged here has affected other elections before in California. As The Heritage Foundation’s Election Fraud Database shows, a very close City Council race in Vernon, California, was overturned in 2012 due to more votes being cast by individuals who did not actually live in the city than the margin of victory.

Compton has seen its share of prior election problems, too. A multiyear election contest over the 2001 mayor’s election resulted in evidence being presented that, among other issues, noncitizens had illegally registered and voted in the election.

In fact, a candidate who was elected to the City Council was disqualified from running for that office after a court found that she had actively and knowingly solicited noncitizens to register and vote.

Unfortunately for the citizens of Compton, California has one of the worst-run election systems in the country. From a lack of sufficient procedures to maintain the accuracy of its voter registration list to its legalization of vote trafficking, it is hard for the residents of the state to have confidence in the integrity of its election process.

The state has a lot of work to do if it wants to improve its administration of elections.