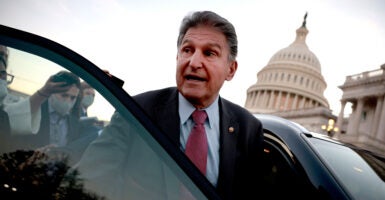 Sen. Joe Manchin, D-W.Va.—seen here outside the Capitol on Dec. 14—has become a pariah to many of his fellow Democrats, especially those on the far left, for his unwillingness to support President Joe Biden's prohibitively expensive Build Back Better social-spending legislation. (Photo: Anna Moneymaker/Getty Images)

Democrats are responding in typical fashion to Sen. Joe Manchin’s promised “no” vote on President Joe Biden’s Build Back Better Act: They are foaming at the mouth.

So, the West Virginia Democrat is a racist, xenophobe, misogynist, and a plutocrat. Congratulations, Senator. You won the Woke-istani superfecta!

MSNBC’s Mehdi Hasan warns, “Manchin is killing the Biden legislative agenda, and perhaps the future of American democracy, too.” Columnist Jennifer Rubin of The Washington Post left no hair unyanked: “Democracy is hanging by a thread.”

None of the left’s spittle-flecked hyperventilation explains why Manchin finally spurned Build Back Better: It stinks.

This monstrosity is too immense, too costly, and too hyperactive. If Build Back Better were a human being, it would need to be duct-taped to a chair and drowned in tranquilizers.

Build Back Better drones on for 2,466 pages, equivalent to 15 copies of the Benediction Classics edition of Charles Dickens’ “A Christmas Carol.” Among randomly chosen items, it addresses ‘‘wildland-urban interface,” “energy savings estimates that accrue to low-income households,” “acquisition, design, and construction of a Great Lakes heavy icebreaker,” “qualified clean hydrogen production,” “Body and spa treatments,” and much, much, much more.

Biden absurdly declared on Sept. 25 that “My Build Back Better agenda costs zero dollars.” This is exactly $1.75 trillion below congressional Democrats’ sticker price. They, in turn, fake this figure by claiming that Build Back Better’s “life-changing provisions”—as House Speaker Nancy Pelosi, D-Calif., dubs them—soon would expire.

Now, would Pelosi plant a grove of shade trees at her Napa Valley vineyard and schedule them for extraction between 2022 and 2027?

Regardless, Democrats sponsored child tax credits, day care for all, Obamacare subsidies, and other socialist goodies, and argued that they would vanish in one to six years. This disinformation helped Democrats construct the bright, shining lie that Build Back Better would cost “only” $1.75 trillion.

Build Back Better also would boost the national debt by $3 trillion. This is light years from Biden’s lie that his bill “adds zero dollars to the national debt.” The bill should be rechristened Build Bankruptcy Better and condemned as a Superfund site amid November’s 6.8% year-over-year inflation rate, the highest since June 1982.

Build Back Better is also a Pandora’s box teeming with far-left vipers and viruses. Among them:

• $2.5 billion in subsidies for trial attorneys who file contingency lawsuits.

• $80 billion to deploy 86,852 brand-new IRS agents to squeeze every conceivable dime from taxpayers with annual incomes as low as $25,000.

• A Civilian Climate Corps would unleash 300,000 busybodies to hector Americans into “greener” lives.

• Pricier child care, due to proposed regulations that babysitters be paid equal to elementary school teachers.

• Universal pre-kindergarten, all the better to brainwash children with critical race theory, gender confusion, and sexy thoughts at ages 3 and 4, rather than 5 or 6.

One need not be a rich white guy who hates blacks, women, and poor people to ponder all of this and yell, “Hell, no!” As for Manchin, he is guilty of only this: His eyes are wide open.