The Major Loopholes in the Iran Deal 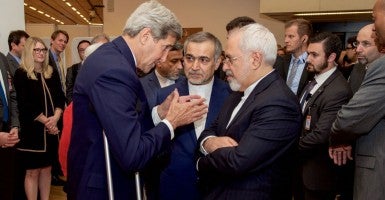 The July 2015 Joint Comprehensive Plan of Action between Iran and a multiple other nations (China, France, Germany, Russia, the United Kingdom, and the United States)has many moving pieces that offer Iran ample opportunities to stall the implementation of the agreement yet reap benefits of lifting sanctions and obtaining access to advance technologies.

Ambiguity is one of the weakest points of the deal, along with U.S. concessions on the inspections regime and a failure to link the agreement with broader U.S. interests in the Middle East, including freeing four American hostages Iran currently holds.

Who is responsible for the monitoring of the deal?—The International Atomic Energy Agency (IAEA).

Iran was given more than generous time under the deal to ratify its Additional Protocol—about 8 years.

Iran has provisionally applied the Additional Protocol earlier, yet continued to lie about its nuclear program and eventually suspended the Protocol’s implementation.

The deal is rewarding and legitimizing Tehran’s deception.

Iran has a history of deception and circumvention of the IAEA verification procedures.

Additionally, IAEA inspections are voluntary and the process makes it very easy for Iran to disguise covert activities and derail IAEA’s work.

By Oct. 15, 2015, Iran has agreed to have the IAEA verify and clarify previous military dimension of Iran’s nuclear program.

In the past, the IAEA found evidence of undeclared activities, for example missing highly enriched uranium and evidence of enrichment activities above the fuel reactor level, and actions that only have utility if Iran wants to build a nuclear weapon.

Iran even obtained a blueprint for manufacturing a nuclear weapon in 1990s. Tehran has been obstructing the IAEA’s access and repeatedly lied about the nature of its activities.

Should the deal move forward, the Dec. 15, 2015, report will provide an initial indication of whether Iran is serious with regard to coming clean on the nature of its nuclear program and following through with commitments specified in the agreement.

The Rather Lengthy Dispute Resolution Mechanism

The dispute resolution mechanism is one of the most touted parts of the agreement.

Upon closer inspection, however, it becomes clear that there is nothing “snapback” about sanctions or about the dispute resolution.

Here is how the process works: If any party believes that Iran or others are not meeting their commitments, it can refer the matter to the Joint Commission (coordinated by the European Union’s High Representative of the European Union for Foreign Affairs and Security Policy).

The commission has 15 days to resolve the issue (the timeframe can be extended by consensus, although the agreement does not specify whether consensus has to be unanimous).

The Advisory Board will have 15 days to provide a non-binding opinion and the Joint Commission will have no more than 5 days to review the opinion. All in all, it might take more than a month for the issue to even come before the United Nations Security Council

Iran will be obstructing every step of the way. The United States could find itself easily outnumbered in the Advisory Board by an Iranian alliance with Russia or China.

Since its resolutions are not binding, the step has the potential to buy Iran time to continue its illicit activities.

The dispute resolution mechanism gives Iran plenty of time to conclude desired deals and implement them even if the U.N. Security Council sanctions come back.

The problem is that the Security Council sanctions are only a component of the sanctions regime.

The European Union and the United States, as well as other countries, have more comprehensive sanctions that will take time to put in place.

Other countries might oppose imposing additional sanctions after normalization of economic relations with Iran resulting in a less effective sanctions regime.

A rather lengthy review process allows Iran to strike deals and implement them even after sanctions are re-imposed.

Iran would undoubtedly take advantage of this major loophole.