Congress Poised to Give Unions a Massive Bailout 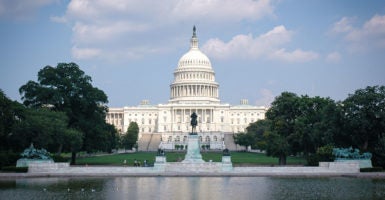 A new report from the Pension Benefit Guaranty Corp. shows that the private union pension crisis is only getting worse, and now Congress is poised to make it worse still.

Not only are many multiemployer pension plans rapidly approaching insolvency, but the situation is so bad that even the pension safety net—the PBGC’s Multiemployer Program—will be bankrupt in just six years, leaving pensioners with mere pennies on the dollar in promised benefits.

Unfortunately, the House of Representatives passed a bill just before leaving for August recess that will make the situation even worse. Not only would the Rehabilitation for Multiemployer Pensions Act (H.R. 397), exacerbate the problem, it would put taxpayers on the hook for potentially $638 billion or more in broken pension promises.

This was never supposed to happen.

For starters, no one—not a private company, not a union, not an individual, not a government—should be allowed to promise workers a pension benefit and then not be held liable to pay it.

That’s why federal law requires that private companies with their own, single-employer pension plans follow specific rules and financial assumptions to ensure they set aside enough money to cover their promised benefits.

State and local government pensions are exempt from these rules because they are sovereign entities with regard to their own employees’ pensions.

Multiemployer pension plans are exempt from these rules because powerful unions successfully lobbied Congress for special treatment. They got it by arguing that their own pooling of employers across an industry would serve as an insurance mechanism against pension losses.

That “safeguard” has failed catastrophically.

The average multiemployer pension plan—of which there are about 1,400 across the U.S.—has set aside only 42% as much as it needs to pay promised benefits.

And no, Wall Street and industry declines are not to blame. The simple truth is that if plans had used the appropriate assumptions, set aside the necessary funds, and increased contributions when shortfalls began developing, promised benefits would have been there regardless of stock market swings or employer bankruptcies.

There is supposed to be a second backstop for the roughly 10.6 million workers and retirees with multiemployer pensions, however. The PBGC—a self-funded government entity—provides insurance to private pension plans.

Because the PBGC relies exclusively on incoming premiums to pay insured benefits, it will be able to pay only about 10% of insured benefits for retirees of failed multiemployer pension plans.

It’s not fair to workers who were promised pensions. Government action is needed to protect pensioners and minimize pension losses. But simply transferring private unions’ and employers’ broken pension promises onto taxpayers is not a viable solution.

Yet, that’s exactly what the bill passed by the House of Representatives would do.

Under H.R. 397 (which is similar to the Butch Lewis Act already before the Senate), insolvent union pension plans would receive taxpayer dollars to invest in the stock market, as well as loans to cover their broken pension promises.

Risking taxpayer money in the stock market and making loans to insolvent pension plans is reckless and wrong.

And instead of fixing the underlying problems, this bailout-without-reform proposal would incentivize union pension plans to become more underfunded so they could receive taxpayer funds.

That would be particularly unfair, considering that Congress has not even addressed its inability to pay its own Social Security obligations to taxpayers.

Instead of a costly bailout-without-reform, Congress should improve the Pension Benefit Guaranty Corp.’s solvency, prevent plans from overpromising and underfunding pensions, and help plans minimize pension reductions across workers.