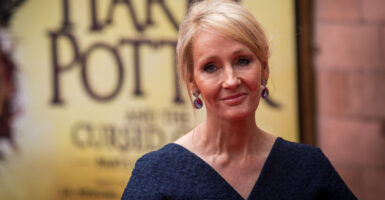 The saying goes, “If you’re catching flak, you’re hitting the target.” No one has proved this more than author J.K. Rowling’s full-throated, no-holds-barred defense of two separate sexes.

The London Times reported: “Police in Scotland confirmed that it would record rapes by offenders with a penis as carried out by a woman if they identified as female, regardless of whether they had legally changed gender.”

In response to this news, Rowling tweeted:

Rowling’s phrasing mimicked the “doublethink” George Orwell wrote about in “1984.” And Rowling, creator of the Harry Potter books, was immediately taken to task and labeled, essentially, a transphobic bigot.

Rob Rousseau, the host and producer of a podcast called “The Insurgents,” tweeted: “You literally have a castle and you spend your time doing this.”

Brett Erlich, the creator of Happy Half Hour, mocked Rowling’s concern by tweeting, “What a weird hill to die on Rowling.”

Daniel Lismore, a British fabric sculptor and designer, said Rowling was fueling hate. He tweeted; “Love is peace. Freedom is acceptance. Understanding is a strength. Trans women are not a danger to society. J.K Rowling loves to fuel hate towards a whole group of innocent beautiful people.”

The outcry was swift and terrible because this is not Rowling’s first offense, so to speak.

For over a year now, Rowling has remained unapologetically opposed to Scotland’s Gender Recognition Act. The law allows biological men to receive a gender recognition certificate to identify as a female without “medical evidence of their diagnosis of gender dysphoria.” This puts biological women and their need for safe and private spaces at risk.

Just this summer, the mob unleashed death threats on Rowling. One Twitter user wrote, “I wish you a very nice pipebomb in mailbox.”

In 2020, Rowling vocalized the now-orthodox view that biological females deserve safe, single-spaces. She articulated her concerns about the growing transgender movement in a her lengthy, moving essay published last summer called “TERF Wars.” TERF is an acronym for trans-exclusionary radical feminist.

“I want trans women to be safe,” Rowling wrote, adding:

At the same time, I do not want to make natal girls and women less safe. When you throw open the doors of bathrooms and changing rooms to any man who believes or feels he’s a woman—and, as I’ve said, gender confirmation certificates may now be granted without any need for surgery or hormones—then you open the door to any and all men who wish to come inside. We’re living through the most misogynistic period I’ve experienced … Everywhere, women are being told to shut up and sit down, or else.

From that point on, some fans disavowed Rowling and critics announced they loathed her. She was not invited to the 20th-anniversary party marking the release of the first Harry Potter film.

Critics and fans alike seemed to know why: her commonsense stance that biological females are unique, separate, and deserve their own spaces.

No one should be immune from criticism just because that person is a public figure, in this case a popular novelist. But I am surprised at the vehement backlash against the creator of a book series millions of people love simply because the author does not fall in lockstep with a radical stance.

To date, Rowling has never publicly said anything hateful or bigoted toward transgender people. She has expressed concern about how the ability to choose one’s own gender has fueled policies that fail to guarantee females’ safety and privacy.