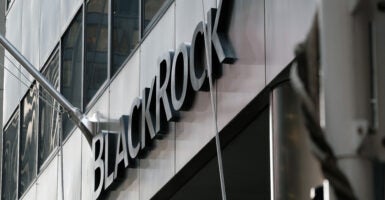 A consumer advocacy group asserts that BlackRock’s push for investments in “environmental, social, and governance” issues is an intended distraction from the vast wealth it has injected into Communist China. Pictured: BlackRock's headquarters in Manhattan on Thursday, the destination of hundreds of members of the United Mine Workers of America protesting the finance giant as the largest shareholder in Warrior Met Coal, a mining company. (Photo: Spencer Platt/Getty Images)

BlackRock Inc., the largest money management corporation not only in America but the world, has emerged as a big promoter of social and environmental investing and of sending billions of U.S. dollars to China.

A consumer advocacy group asserts that New York-based BlackRock’s push for investing in “environmental, social, and governance” issues, known as ESG, is intended to distract from the vast wealth that the corporation has injected into Communist China despite human rights abuses there.

“They are hamstringing U.S. corporations with bean counting on board membership and diversity quotas while they are pouring billions into China,” William Hild, executive director of the nonprofit Consumers’ Research, said of BlackRock in an interview with The Daily Signal.

“They are virtue-signaling while having a relationship with a ruthless regime, and we believe one is being used to cover for the other,” Hild said of the politically connected corporation.

In late October, Consumers’ Research launched a digital and TV ad campaign that is heavily critical of BlackRock’s ties to China.

“BlackRock is propping up Chinese Communist Leaders,” the advertisement says, adding: “Even left-wing billionaire George Soros knows BlackRock is harming US national security. [BlackRock] CEO Larry Fink loves to tell Americans how to live, but he negotiated against America, sucking up to China.”

Former executives at BlackRock hold influential positions in the Biden administration, and were part of the Obama administration before that.

“As a fiduciary to our clients, BlackRock focuses on matters like diversity in the boardroom and climate risk because we believe these are material issues that can affect the long-term value of our clients’ investments,” a BlackRock spokesman told The Daily Signal in an email statement. “Those are the issues the funders and leaders of this campaign do not appear to agree with.”

Here are four things to know about BlackRock and its ties to China.

The commercial from Consumers’ Research asserts that BlackRock is “putting money into surveillance companies used by the Chinese military.”

BlackRock has invested millions in the Chinese surveillance companies Hikvision and iFlytek, The American Prospect, a liberal magazine and website, reported. The U.S. government prohibits both companies from buying American products or selling to American companies.

The BlackRock spokesman did not address China in the corporate statement, nor respond directly to The Daily Signal’s questions about surveillance.

But the BlackRock website does tout the value of China for investors, saying:

To help discover the opportunities these changes provide, you need a trusted partner who is not only an expert on China but can apply their knowledge, expertise and judgment in creating portfolios that can deliver the best of Chinese markets to you. BlackRock’s large and experienced team can provide you with a truly differentiated perspective on China and our breadth of solutions across active and index strategies give you a multitude of ways to access the market.

Hikvision has advertised itself as the world’s largest manufacturer of video surveillance technology; iFlytek is a voice recognition and AI company.

BlackRock reportedly invested more than $15 million in Hikvision, but has a significantly more modest investment in iFlytek.

The American Prospect isn’t the only critic on the left of BlackRock’s ties to China.

“In BlackRock’s ESG Aware emerging market exchange-traded fund, Chinese companies represent a third of total investments,” Soros wrote. “These indices have effectively forced hundreds of billions of dollars belonging to U.S. investors into Chinese companies whose corporate governance does not meet the required standard—power and accountability is now exercised by one man who is not accountable to any international authority.”

By “one man,” Soros was referencing Chinese President Xi Jinping, who has near total control in the communist nation.

In his op-ed, Soros called for U.S. government intervention:

The U.S Congress should pass a bipartisan bill explicitly requiring that asset managers invest only in companies where actual governance structures are both transparent and aligned with stakeholders. This rule should obviously apply to the performance benchmarks selected by pensions and other retirement portfolios.

Most notable is Brian Deese, director of the National Economic Council at the White House. Deese was the global head of sustainable investing at BlackRock, where he focused on environmental, social, and governance issues.

Deese previously served in senior roles with the Obama White House’s National Economic Council and in its Office of Management and Budget.

Wally Adeyemo, deputy secretary of the Treasury Department, previously was a senior adviser to BlackRock.

In May, BlackRock used its leverage to help an activist hedge fund group, Engine No. 1, replace three ExxonMobil board members with environmental activists who oppose further drilling for oil and gas.

In a February 2019 memo, BlackRock said: “Our work fuels our conviction that the future of investing is sustainable [energy].”

And in a January 2020 letter to CEOs of other corporations, Fink wrote that BlackRock “was a founding member of the Task Force on Climate-Related Financial Disclosures” and called on all companies to issue sustainability reports. He added: “We hold ourselves to this same standard.”

On environmental, social, and governance investing, or ESG, Fink wrote:

Questions of racial justice, economic inequality, or community engagement are often classed as an ‘S’ issue in ESG conversations. But it is misguided to draw such stark lines between these categories. For example, climate change is already having a disproportionate impact on low-income communities around the world—is that an E or an S issue?

What matters is less the category we place these questions in, but the information we have to understand them and how they interact with each other. Improved data and disclosures will help us better understand the deep interdependence between environmental and social issues.