What Is Wrong With Corporate Wokeism on Political Causes 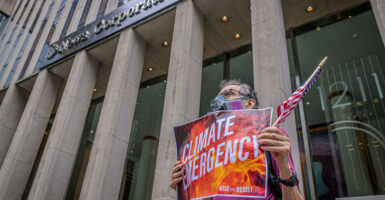 Environmental, social, and governance responsibility advocates force companies to take positions in the political arena on issues that may have nothing to do with the company’s actual business activities. Pictured: An activist protests outside the headquarters of Fox News in Manhattan, New York, regarding the network’s alleged anti-climate rhetoric. (Photo: Erik McGregor/LightRocket/Getty Images)

Everywhere you look, leftist members of big investment companies like BlackRock Inc. and “woke” CEOs at companies like Delta Air Lines Inc. prattle on about “ESG,” which stands for environmental, social, and governance responsibility.

Environmental, social, and governance responsibility advocates force companies to take positions in the political arena on issues that may have nothing to do with the company’s actual business activities.

Typical targets include use of fossil fuels, Second Amendment rights, and welfare policy. In their self-righteous elitism, environmental, social, and governance responsibility advocates have no qualms about the use of shareholders’ assets—other people’s money—to promote their various political causes.

Companies like Delta Air Lines provide air transportation to customers. Because people choose to buy their services, airline stewardesses, mechanics, and pilots, among others, have jobs. The employees of corporations can choose to donate a portion of their paychecks to woke causes if they choose. There is nothing wrong with that.

People who own shares of corporations can also choose to invest in so-called social justice causes. Environmental, social, and governance responsibility advocates want to take that choice away by pressuring management to toe the woke line with their shareholders’ money.

Much of environmental, social, and governance responsibility is virtue signaling done to elevate the reputations of senior executives. In reality, what they are signaling is their dereliction of their fiduciary duty to those who have invested in their companies.

Milton Friedman, writing in 1970, may have put it best when he said:

When I hear businessmen speak eloquently about the ‘social responsibilities of business in a free-enterprise system,’ I am reminded of the wonderful line about the Frenchman who discovered at the age of 70 that he had been speaking prose all his life. The businessmen believe that they are defending free enterprise when they declaim that business is not concerned ‘merely’ with profit but also with promoting desirable ‘social’ ends; that business has a ‘social conscience’ and takes seriously its responsibilities for providing employment, eliminating discrimination, avoiding pollution and whatever else may be the catchwords of the contemporary crop of reformers.

In fact they are—or would be if they or any one else took them seriously—preaching pure and unadulterated socialism.

The whole justification for permitting the corporate executive to be selected by the stockholders is that the executive is an agent serving the interests of his principal. This justification disappears when the corporate executive imposes taxes and spends the proceeds for ‘social’ purposes. He becomes in effect a public employee, a civil servant, even though he remains in name an employee of private enterprise. On grounds of political principle, it is intolerable that such civil servants—insofar as their actions in the name of social responsibility are real and not just window-dressing—should be selected as they are now.

Environmental, social, and governance responsibility—like efforts to politicize the judiciary—is an example of the left overstepping its bounds and expanding the political realm into the farthest reaches of society while simultaneously demonizing and mischaracterizing people who disagree with its bossy, woke explanations of how things are.

The left’s insatiable appetite for all things political should be met with a clear response by economic freedom-loving people everywhere not to feed it, lest the monster grows larger.