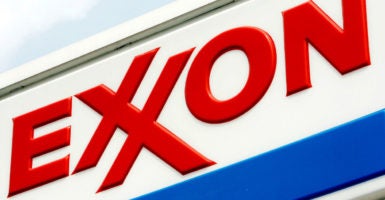 An investor-created proposal that would force Exxon Mobil Corp. to measure how regulations limiting greenhouse gasses could impact the value of the company’s oil assets is receiving intense scrutiny from shareholders. (Photo: Justin Lane/EPA/Newscom)

BlackRock and Vanguard Group are toying with the idea of supporting an investor-created proposal that would force Exxon to measure how regulations limiting greenhouse gases could affect the value of the company’s oil assets, sources told The Wall Street Journal on Thursday.

The measure is receiving intense scrutiny from shareholders who worry Exxon could get wobbly-kneed in the face of the environmentalist push.

Some analysts believe the measure, if passed, could indicate the full weight and force powerful investors and money managers who are concerned about climate change have on energy companies. Exxon is opposed to the measure and will find out whether Vanguard and BlackRock support it at the company’s annual meeting May 31.

But Steve Milloy, a lawyer-statistician and climate skeptic, says he believes Exxon’s shareholders are flirting with the devil.

Coal companies know what happens when shareholders entertain measures that could potentially affect their financial bottom line, said Milloy, a global warming skeptic and founder of the website JunkScience.com.

“It’s kind of ironic that you have a president who wants to roll back regulations against oil producers, yet companies like Exxon want more rules to be heaped on them,” said Milloy, an Exxon shareholder who will speak in opposition to the measure at the meeting next week.

Milloy has advocated that the oil producer end its support for a national carbon tax, rebuke the Paris Agreement on climate change, and discontinue funding climate research

“The threat would have been hypothetical no more than five years ago,” he added, “but the threat is real now. Shareholders get zeroed out because of all of this global warming hysteria.”

Timothy Smith, a director at Walden Asset Management, which backs the Exxon measure, for instance, told reporters that a few short years ago investors were not talking about the effect climate change has on business, but “now the evidence just slaps you in the face.”

BlackRock has not publicly supported the measure.

“No decision has been made regarding our vote at Exxon’s Annual Shareholder Meeting. Our deliberations continue and we look forward to continued engagement with the company,” said Zach Oleksiuk, head of the Americas for BlackRock’s investment stewardship group.

Vanguard could be dissuaded from joining the climate crowd if Exxon offers concessions, such as allowing nonemployee directors to meet with investors, the sources said. Similar concessions have worked in the past on other measures addressing global warming.

“Directors at any company who don’t engage with those on whose behalf they serve risk losing investor support,” Glenn Booraem, a principal at Vanguard, said in a statement about possible concessions Exxon should consider.

The measure comes as Exxon continues beating off a campaign led by state attorneys general to force the Texas-based oil producer into turning over decades worth of documents allegedly showing it hid knowledge about global warming from the public.

Much of the crusade against Exxon’s climate history is based on reports from liberal-leaning media outlet InsideClimate News and Columbia University, which claim Exxon has known the risks of global warming for decades but kept such knowledge under wraps.

Milloy, for his part, submitted a resolution in April through a mutual fund he called the Free Enterprise Action Fund, which requests Exxon change its bylaws blocking stockholders from filing resolutions.

His plan came after an activist-led move to force Exxon into naming a climatologist to the company’s board of directors. It relented and elected Susan Avery, a former director of the Woods Hole Oceanographic Institution.

Milloy said activists with political views have undercut the company’s interests for years.

BlackRock received scorn and relentless criticism at Exxon’s annual meeting last year after it opposed a similar proposal. The group will make the disclosure of climate risks a key point of discussion with Exxon managers this year.

Next week’s investor-led measure hinges on many of Exxon’s largest shareholders, most of whom own about 20 percent of the company, said Anne Simpson, investment director for sustainability at the California Public Employees’ Retirement System. That pension fund has worked on oil and gas divestment issues in the past.

Simpson added: “At the end of the day, the outcome will turn on what do the big fund managers and mutual funds do.”

Content created by The Daily Caller News Foundation is available without charge to any eligible news publisher that can provide a large audience. For licensing opportunities, email licensing@dailycallernewsfoundation.org.