It’s Past Time for US Military Base in Baltics 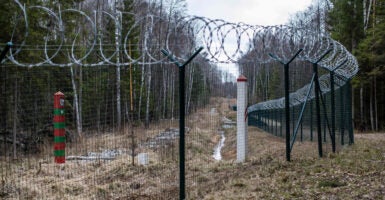 The U.S. should establish a military base in one of the three Baltic States to defend the area from Russian aggression. Pictured: The Latvian-Russian border near Pasiene, the easternmost point of Latvia. (Photo: Wojtek Radwanski/AFP/Getty Images)

Roy Mathews is a recent graduate of Bates College and a member of the Young Leaders Program at The Heritage Foundation.

The Baltic States—Estonia, Latvia, and Lithuania—continue to face ongoing aggression and attacks from Russia. The United States should establish a permanent military presence in one of the three Baltic States to defend the region from Russian aggression, and to reassert America’s security guarantee to our European allies.

The Baltic States continue to be important U.S. allies, champions of economic freedom, strong supporters of the North Atlantic Treaty Organization, and committed investors in defense capabilities. The Baltic States have consistently met the North Atlantic Treaty Organization’s benchmarks to spend at least 2% of gross domestic product on national defense.

The North Atlantic Treaty Organization is a security alliance founded in 1949 to protect European countries from the threat of the Soviet Union and has maintained peace in Europe for over 70 years. While the Soviet Union may be gone, the threats to the North Atlantic Treaty Organization members are no less acute, especially those countries bordering Russia.

In Lithuania, about 77% of the population approves of the alliance. This is because Russia continues to cast doubt on the Baltics’ sovereignty, as the region has historically been part of Russia.

Despite joining the North Atlantic Treaty Organization in 2004, the Baltic States face continued and persistent aggression from Russia. The Heritage Foundation’s 2022 Index of U.S. Military Strength sheds light on the myriad of ways in which Russia seeks to undermine the legitimacy of the Baltic States. (The Daily Signal is the multimedia news outlet of The Heritage Foundation.)

Russia has also repeatedly encroached on the Baltic States’ sovereignty, whether it was during the 2018 naval exercises inside Latvia’s exclusive economic zone or launching multiple aircraft incursions into the Baltic States. North Atlantic Treaty Organization fighter jets scrambled 10 times in a single day in March 2021 to intercept Russian aircraft.

The small size of the Baltic States and the region’s geographic realities make the area difficult, although not impossible, to defend. As The Heritage Foundation noted, “The Baltic region is probably the only region inside the North Atlantic Treaty Organization that is too small to depend on military units based elsewhere for its defense.”

Russia’s militarization of the Kaliningrad region that borders Lithuania and Poland also complicates defense of the Baltics. Russia has also strengthened its ties with Belarus, which shares a border with Latvia, Lithuania, and Poland.

This year, Russia and Belarus recently staged the largest military exercises since the Cold War nearby Latvia and Lithuania. This heightened tensions due to Russia’s use of war games to cover for a ground offensive into Georgia in 2008. Russia’s frequent military demonstrations have also been used as cover for real military operations, including Russia’s annexation of Crimea in 2014.

Despite these challenges, as a North Atlantic Treaty Organization member, the U.S. is obligated to defend the Baltic States. As Heritage experts have noted, “Deterring Russian aggression and defending the Baltic States will be far easier and cheaper than liberating them.”

A permanent military base in Eastern Europe, including the Baltic States, would go a long way to deterring further Russian aggression, and would also reassure European allies leery of U.S. staying power post-Afghanistan withdrawal.

While the U.S. has rotational forces in the region, a permanent military presence would demonstrate America’s long-term commitment to the North Atlantic Treaty Organization and serve as a permanent obstacle against Russian forces being able to seize the Baltic States quickly.

The U.S. would be welcomed, with allies willing to take on some of the financial burden to permanently station U.S. forces in the region. Latvia’s Defense Minister Artis Pabriks called the U.S. in August 2020 “the most powerful ally and its deterrent effect is not comparable to other allies … we are ready to invest in this [a permanent military presence].”

The Baltic States deserve to be secure in their sovereignty. A permanent U.S. presence on the ground would further secure a vulnerable region from further Russian hostility.