Sen. Toomey Rises ‘in Defense of Capitalism’ Against Critics on Left, Right 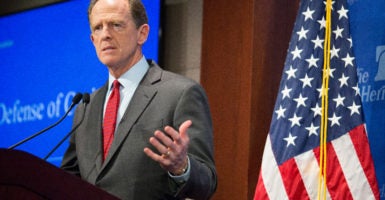 A booming market capitalism economy produces good for everyone, Sen. Pat Toomey, R-Pa., said March 11 at a presentation, “In Defense of Capitalism,” at The Heritage Foundation. (Photo: Willis Bretz)

Families today are driving safer cars, living in larger houses, and using technology unimaginable 20 years ago. The standard of living in the United States is constantly rising as a result of market capitalism.

While Sen. Bernie Sanders, I-Vt., a self-described “democratic socialist,” is perhaps the most high-profile critic of market capitalism, even some on the center-right question its value.

But one of Sanders’ Senate colleagues, Sen. Pat Toomey, R-Pa., said denying the power of capitalism is problematic.

He said some on the right are adopting the left’s notion that capitalism is the cause of inequality. Those skeptics advocate expansion of the role of government and reducing the economic freedom of individual Americans, the Pennsylvania lawmaker said.

Toomey, 58, spoke March 11 at a presentation, “In Defense of Capitalism,” at The Heritage Foundation, where, in response to critics of capitalism, he cited a quote from National Review correspondent Kevin Williamson: “Capitalism is not a rival to common good. Capitalism—meaning, security in one’s own property and the right to work and trade—is the common good.”

The increasing divide between those on the right who have a lessening faith in the power of capitalism and those who hold traditionally economic conservative views signals a rejection of the ideas of economic libertarianism that helped found the Republican coalition, which has endured for over 60 years, the second-term senator said.

Economic freedom isn’t just a necessary part of the right’s beliefs; it’s the foundation of America’s prosperity, he said. A booming economy produces good for everyone.

Toomey also warned that nuclear families are struggling and are missing the community support they used to have, which contributes to a decline in civil society. At the same time, the culture is being debased, and that requires the promotion of virtue in society, he said.

Acknowledging those crises is important, he said. Communities feel left behind as Americans suffer from the highest rates of drug addiction in the past 20 years, increasing suicide rates, decreasing marriage and fertility rates, and declining church attendance.

Capitalism isn’t the cause of those problems, however, and in many cases, Toomey said, the welfare state is driving them. Promoting economic growth makes all problems easier to solve, he added.

Toomey called on his fellow Republicans to focus reforms beyond economic policy, beginning with education. Reforming education should include more school choice policies, which he said harness the competitive power of the markets to benefit children the most.

He also decried what he said was a stigma against young adults pursuing careers in trades, rather than a four-year degree, despite the tremendous range of job opportunities those trades provide. In Pennsylvania, he said, there are many options for those interested in, for example, welding and manufacturing.

“How many kids, like my kids, are going to lose the chance to get a great job and launch a great career that they’re really excited about that allows them to support a family, that allows them to do all the things we want for young people?” he asked.

There’s no economic system that enables everyone to be equally rich, Toomey said, but Republicans should promote the system that provides the best conditions for the largest number of people—namely, market capitalism.