Communicating Capitalism to the Next Generation 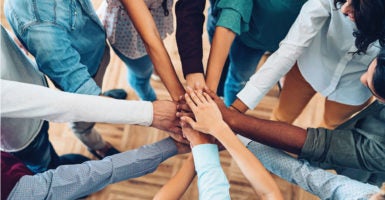 More Americans between 18 and 29 now support socialism over capitalism, at least in name. (Photo: pixelfit/Getty Images)

America enjoys levels of wealth and prosperity never before experienced in world history. For that, we can thank capitalism.

Part of the problem may be ignorance. According to Merriam-Webster, socialism is “any of various economic and political theories advocating collective or governmental ownership and administration of the means of production and distribution of goods.” Yet the youthful adherents of “socialism” typically claim to want something different, specifically a large cradle-to-grave welfare state.

Whatever the content of the creed, unfortunately, the attachment of young Americans to the label under which Stalin, Mao, and Castro marched is disturbing, to say the least.

As Alan Charles Kors, Henry Charles Lea professor emeritus of history at the University of Pennsylvania, has reminded us:

No cause, ever, in the history of all mankind, has produced more cold-blooded tyrants, more slaughtered innocents, and more orphans than socialism with power. It surpassed, exponentially, all other systems of production in turning out the dead.

Indeed, history manifestly shows that neither socialism nor other alternative economic systems—and many have been tried—come close to the record of free-market capitalism in promoting peace and growth, as well as improving the overall human condition.

We live in a golden age of economic progress. People today enjoy longer lives, significantly better health, and a level of living standards that would have been unimaginable just a few generations ago. Billions around the world have escaped poverty. Things that people take for granted—antibiotics, the iPhone, air travel—would have seemed like magic to our great-grandparents.

Bono knows this as well as anyone. The lead singer for U2 has led poverty-fighting initiatives for decades, and in those efforts, he has come to a telling realization. In his own words:

As a person who’s spent nearly 30 years fighting to get people out of poverty, it was somewhat humbling to realize that commerce played a bigger job than development. I’d say that’s my biggest transformation in 10 years: understanding the power of commerce to make or break lives, and that it cannot be given into as the dominating force in our lives.

He couldn’t be more right. Prosperity has not arisen from the beneficence of some good king or a benign technocracy of experts, let alone socialism. Rather, it is the result of the hard work and innovative entrepreneurship of those who have demanded and exercised the fundamental freedom to decide for themselves how to live their lives under free-market capitalism.

The free-market capitalist system, whose growth is so well documented in The Heritage Foundation’s Index of Economic Freedom, has empowered countless individuals around the world by giving them more choices and opportunities. Reforms that enhance economic freedom have enabled hundreds of millions to escape poverty and countless others to enjoy levels of prosperity never before seen.

A recurring theme of human history has been resilience and revival. As Friedrich A. Hayek once observed, “If old truths are to retain their hold on men’s minds, they must be restated in the language and concepts of successive generations.”

Unquestionably, the time to reinstate the language of capitalism for America’s young people is now.