Why a Former CEO Says Capitalism, Not Socialism, Encourages Morality 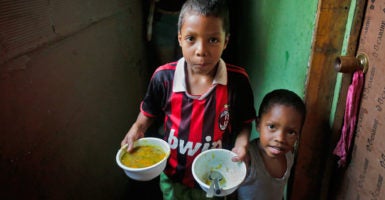 Two boys of Barrio Unión - Sector Las Casitas eat soup prepared and donated by Alto Restaurant in the house of a neighbor on April 12 in Caracas, Venezuela. Most supermarkets and shops in Venezuela do not offer a wide variety and amount of food and goods due to the shortage that affects the country. (Photo: Eva Marie Uzcategui/Getty Images)

Andy Puzder grew up in a blue-collar home. He went on to be the CEO of a major fast-food company and he credits capitalism for helping him improve his lot in life. Now he wants young Americans to understand that socialism isn’t just ineffective, but is morally inferior to capitalism. Read the interview, posted below, or listen to the podcast:

Daniel Davis: I’m joined now by Andy Puzder. He served as the CEO of CKE Restaurants for about 17 years. CKE is the parent company of the Carl’s Jr. and Hardee’s chains. If you enjoy those burgers, this is the man who made that happen. Thanks for joining us on the podcast today.

Andy Puzder: My pleasure to be here, Daniel. Thanks for having me.

Davis: So, you were CEO of this company, but you didn’t begin your career that way.

Davis: Tell us about your upbringing, and particularly about how America’s system of capitalism enabled your life story to happen.

For me, there was a change one day, when my dad asked me to go to deliver a car with him, to a very rich guy, in a very rich area near us.

His name was George Humphrey. His father had been secretary of the Treasury. He was in this area called Hunting Valley, which is this beautiful part of Ohio, east of Cleveland.

So, these huge gates open. We drive in. There’s this beautiful, beautiful white house. It was sunset. It must have been painted in high-gloss paint. It was kind of shiny. And everything’s perfectly manicured.

We lived in, like, a [2,000-square-foot] ranch house, with my brother, my sister, my mom, and my dad. Anyway, we drive in. But my dad started to drive around the house, and drive away.

I said, “Why didn’t you stop?” And my dad looks at me and says, “That was the guest house.”

So, we keep driving. We go by these stables, which were probably nicer than the house we lived in. It was Hunting Valley. There was fox hunting. And there was a polo field nearby, so he had horses.

And we come around the corner. We come to this house that, in my mind, is like “Downton Abbey.” I can’t tell you how big it actually was. But to a 10-year-old kid, it was “Downton Abbey.”

And I’m stunned by it all. I’ve never seen anything like this. And we go up to the front door. Mr. Humphrey knew my dad. They got along well. They exchanged keys for the trade-in, and the car my dad was delivering. They talked for a bit.

And we’re walking back. I asked my dad, I said, “What does Mr. Humphrey do that he can live like this?” And my dad said, “He’s a lawyer, and he owns a company.” I can still remember thinking, to this day, “A lawyer. I could be a lawyer.”

Now thank God we lived in a country where a working-class kid like me could become a lawyer, and have a chance to eventually become the CEO of an international corporation myself.

I think it was more important for what I didn’t think. I didn’t think, this SOB is in the 1%. He must be screwing us. He’s like a robber baron.

That didn’t occur to me. You didn’t think about it that way back then. Back then, what I thought was, you know, “Maybe, maybe I could do this.”

So, that’s kind of my introduction, I think. That was Adam Smith’s “invisible hand” kind of tapping me on the shoulder.

Davis: Yes. Well, you mentioned the 1%, and that sort of gets into this discussion of socialism. Increasingly, young people in America are enamored with socialism, as it’s been popularized by Sen. Bernie Sanders and Rep. Alexandria Ocasio-Cortez.

What’s the basic misperception that you want to point out to young people who see this as a good thing?

Puzder: I think the thing that young people need to understand is that socialism is not benevolent, and capitalism is not based on greed.

If you’re in a capitalist economy, the only way you can succeed is by meeting the needs of other people. You have to meet the needs of your consumers.

When I ran CKE, when I ran Carl’s and Hardee’s, it was trying to figure out how we could provide customers with the products they wanted, at the price that they could afford.

We spent millions of dollars trying to figure that out. Every business does that. The better you meet the needs of other people, the more you will succeed in a capitalist society.

And it empowers consumers, who then vote with every dollar they spend, as to which products succeed, and which fail. So, it actually empowers the masses, and focuses everybody’s energies on meeting their needs, resulting in prosperity and abundance.

Socialism, on the other hand, focuses you inward. You’re focused on what you can get. How you can get the most for yourself from a limited supply of goods or services the government makes available, whether it’s food, or government-mandated health care, or gasoline.

So, socialism really focuses you on being greedy, trying to get the most for yourself, whereas capitalism takes that desire to improve your life, and focuses it outward, on the needs of other people.

Davis: And, of course, it’s not just theory. I mean, it’s playing out before us right now.

Davis: Venezuela. North Korea. It’s kind of remarkable how you look at all these countries, and the leaders of these countries are really the only ones enjoying prosperity—which is the exact opposite of what they promise.

But think about [North Korean dictator] Kim Jong Un. Just get a picture of him in your mind. [Does it look] like that guy’s missed a meal lately?

I mean, you know, this is what happens with people in socialist countries. The government elite who control the economy do very well.

In a capitalist country, the consumers, the masses, who control the economy, do very well.

And, by the way, Denmark is a free-market, capitalist economy. It is not a socialist economy. So, when like Sanders is out there, or Ocasio-Cortez, saying, “Oh, we’re Denmark. We’re not Cuba. We’re not Venezuela. We’re Denmark.” Well, you know what? Denmark, the people in Denmark, get irritated when they say that.

Davis: Right, right. No. They say that “democratic socialism” is the term, right?

Puzder: Capitalism’s democratic. It’s the most democratic economic system. You vote with every dollar you spend. They have to add “democratic” to “socialist” to make it sound better than it is.

I mean, look, socialists are great at propagating myths. The big myth is that socialism is either necessary or desirable to protect the masses from capitalist greed.

That’s a myth. It’s also a lie—“myth” being a polite word for a “lie,” in that circumstance.

But they’re great with stuff like this. Oh, it’s “democratic socialism.” It must be OK. That’s baloney. … Every place, every time, every place, everywhere socialism’s been tried, it results in disaster.

Venezuela was the richest country in the world in 2011. It sits on an ocean of oil. The people are eating their pets. I mean, it’s a terrible, terrible situation there.

So, be careful. You just might get what you ask for, if you’re promoting socialism.

Davis: Well, the socialist crowd is also pushing a policy they call the “Fight for $15”—this minimum wage, federal minimum-wage policy. That’s something that I suspect you would have a lot of insight on, having run a company that would have been affected by that.

How would, from your vantage point, if you’re running a company like Carl’s Jr. or Hardee’s, what does the minimum wage, what’s the practical impact of that on your company?

Puzder: When you increase the minimum wage beyond what the market can bear, what you force businesses to do is, No. 1, stop growing, because they’re only going to open profitable businesses. And for the ones that are already open, you force them to find ways to cut labor.

Now, if you want to increase wages—Trump is proving this—the way to do that is economic growth. We’re now seeing the most spectacular wage growth we’ve seen in a decade, and maybe more. And it’s primarily impacting people in the restaurant industry, hotel workers, retail workers.

They’re actually getting more. Their wages are up about 4% year over year, whereas wages generally are up about 3%.

When you force economic growth down by requiring businesses to pay more for people than the market can bear, then you reduce economic growth, and fewer people are in play. Now, the unions can then take credit. “Well, we got $15-an-hour wage.”

They don’t tell you that businesses didn’t open. People lost their jobs. People had their hours reduced. Automation increased. You don’t hear about any of that.

So, the market is driving wages much more effectively, and much faster, than any unions could, or the Service Employees International Union, or any government entity. And it’s being done in a way that businesses are actually competing for employees, and that’s raising their wages.

Davis: That’s remarkable. Well, Andy Puzder, we really appreciate your insights on all of this.

Puzder: Happy to do it, Daniel.

Davis: And if you want to celebrate capitalism, maybe go get a Carl’s Jr. burger or something like that.

Puzder: Or “The Capitalist Comeback,” my book, on which I will make no money. I’m donating all the proceeds to a charity that encourages entrepreneurship in minority communities. … I gave this big, capitalist lecture, and now I’m telling you I’m giving the money away. I’m doing a reverse Bernie Sanders.

Puzder: I’m not going to tell you I’m keeping the money. I’m telling you I’m going to give the money away.

Puzder: So, if you buy the book, you won’t benefit me economically, but I didn’t write it to benefit economically. I did it to get the word out.

Davis: That’s what the book is called. Great. Andy Puzder, appreciate your time.