Why Capitalism Is Morally Superior to Socialism 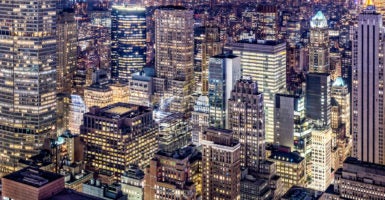 Free market capitalism in America has been so successful in eliminating the traditional problems of mankind—such as disease, pestilence, hunger, and gross poverty—that all other human problems appear both unbearable and inexcusable. (Photo: Ultima_Gaina/Getty Images)

That, I believe, is a result of their ignorance and indoctrination during their school years, from kindergarten through college. For the most part, neither they nor many of their teachers and professors know what free market capitalism is.

Free market capitalism, wherein there is peaceful voluntary exchange, is morally superior to any other economic system. Why? Let’s start with my initial premise.

All of us own ourselves. I am my private property, and you are yours. Murder, rape, theft, and the initiation of violence are immoral because they violate self-ownership. Similarly, the forcible use of one person to serve the purposes of another person, for any reason, is immoral because it violates self-ownership.

Tragically, two-thirds to three-quarters of the federal budget can be described as Congress taking the rightful earnings of one American to give to another American—using one American to serve another. Such acts include farm subsidies, business bailouts, Social Security, Medicare, Medicaid, food stamps, welfare, and many other programs.

Free market capitalism is disfavored by many Americans—and threatened—not because of its failure but, ironically, because of its success. Free market capitalism in America has been so successful in eliminating the traditional problems of mankind—such as disease, pestilence, hunger, and gross poverty—that all other human problems appear both unbearable and inexcusable.

The desire by many Americans to eliminate these so-called unbearable and inexcusable problems has led to the call for socialism. That call includes equality of income, sex, and race balance; affordable housing and medical care; orderly markets; and many other socialistic ideas.

It turns out that we seldom find people upset with and in conflict with computer and clothing stores, supermarkets, and hardware stores. We do see people highly dissatisfied with and often in conflict with boards of education, motor vehicles departments, police, and city sanitation services.

What are the differences? For one, the motivation for the provision of services of computer and clothing stores, supermarkets, and hardware stores is profit. Also, if you’re dissatisfied with their services, you can instantaneously fire them by taking your business elsewhere.

It’s a different matter with public education, motor vehicles departments, police, and city sanitation services. They are not motivated by profit at all. Plus, if you’re dissatisfied with their service, it is costly and in many cases, even impossible to fire them.

A much larger and totally ignored question has to do with the brutality of socialism. In the 20th century, the one-party socialist states of the Union of Soviet Socialist Republics, Germany under the National Socialist German Workers’ Party, and the People’s Republic of China were responsible for the murder of 118 million citizens, mostly their own.

The tallies were: USSR, 62 million; Nazi Germany, 21 million; and People’s Republic of China, 35 million. No such record of brutality can be found in countries that tend toward free market capitalism.

As Thomas Sowell says, “Socialism sounds great. It has always sounded great. And it will probably always continue to sound great. It is only when you go beyond rhetoric, and start looking at hard facts, that socialism turns out to be a big disappointment, if not a disaster.”