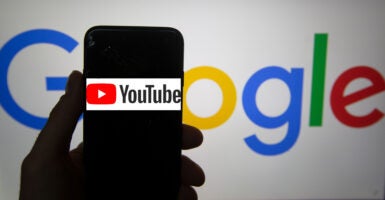 The New York Times described Novara as “unapologetically left-wing” and lamented its plight, along with that of other “independent journalists, activists, and creators” who were removed from YouTube. (Photo: Alexander Pohl/NurPhoto/Getty Images)

The article, titled “How a Mistake by YouTube Shows Its Power Over Media,” criticized the tech platform’s “opaque and sometimes arbitrarily enforced” rules, describing the company as an information “gatekeeper.”

Novara, a British news company publishing “left-leaning” content according to The New York Times, had its YouTube channel removed Tuesday for several hours. The company posted a statement to its Twitter account informing the public that its channel had been deleted and then reinstated, with YouTube claiming the channel’s suspension was a mistake.

“They are a monopoly, there is no alternative,” Novara employee Michael Walker told The New York Times. “If we move to Vimeo or whatever other platform, we wouldn’t acquire the viewers.”

The Times described Novara as “unapologetically left-wing” and lamented its plight, along with that of other “independent journalists, activists, and creators” who were removed from YouTube.

“We had this ambient awareness of our dependence on these big tech platforms,” contributing editor Ash Sarkar told the newspaper. “But there’s nothing like having your livelihood snatched away from you to make you feel really disempowered.”