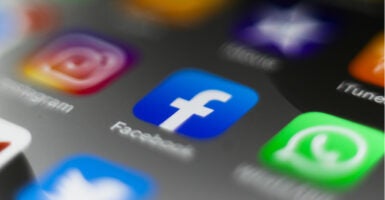 Social media platforms need to leave their biases out of their business models and apply their rules and standards fairly and impartially. (Photo: Jakub Porzycki/NurPhoto via Getty Images)

Twitter and Facebook are quickly backpedaling after suppressing a New York Post story damaging to former Vice President Joe Biden, but that doesn’t erase the fact that just weeks before an election, the social media platforms continue to enforce their rules differently for those with whom they disagree politically.

When the Post published a story last week that Biden’s son, Hunter Biden, allegedly made money from providing access to his father when he was vice president, it seemed like Twitter and Facebook all of a sudden “got religion,” as we say in the South.

The platforms said they spiked the story because it contained links to documents—allegedly from Hunter Biden’s personal computer—that they claimed might have been hacked or illegally obtained or that the story might be outright disinformation.

Boy, that’s a great standard to have, but it’s funny how they didn’t seem to have that same standard when it came to left-wing news outlets reporting on near-daily anonymous leaks from within the federal government and other stories that would seemingly fall under the same rules.

In particular, Twitter’s excuses for taking down the Post link and blocking anyone who shared it just didn’t hold water.

The problem with the excuse that the article may have violated policies against sharing hacked material is that, so far, there’s no evidence the emails were hacked or otherwise illegally obtained.

In fact, neither Joe Biden nor Hunter Biden claimed Hunter Biden was hacked, nor did they dispute the facts of the reporting. The Post reported that the computer was turned over to a computer shop for repairs and never claimed, which meant it became the property of the shop owner.

The other problem with that excuse is that Twitter allows hacked information from WikiLeaks and other sources all the time.

Twitter also claimed that its concerns about the article were due to the “lack of authoritative reporting” from the New York Post. Although it has a conservative bent, the Post is one of the largest mainstream newspapers in the country.

Again, has Twitter expressed concern about the lack of authoritative reporting from The New York Times, The Washington Post, BuzzFeed, or others?

Clearly, there is bias here.

The Heritage Foundation has seen firsthand how Big Tech companies block or otherwise limit the reach of our own content—even medical information provided by licensed doctors—because that information doesn’t agree with certain platforms’ social or political agendas. They do it through politicized fact checks, contrived labels, removing posts, or even blocking users.

The film examines the left’s use of a false racial narrative after Michael Brown’s 2014 death to divide a nation, setting off riots in Ferguson, Missouri, and around the country. While the film is timely and informative, the narrative it debunks is the very narrative that Amazon and many in Big Tech have been promoting.

One can certainly understand that Twitter and Facebook and other platforms have rules to protect users, to prevent the spread of false information and foreign propaganda, and to otherwise provide a safe user experience.

But they have politicized these rules, and the evidence continues to mount that their application of these rules is dependent on whether they agree with the user’s political viewpoint. The result is a collapse in public trust and a significant impact on the American electoral process.

According to recent polling by Pew, an astounding 72% of Americans think it’s likely that “social media platforms actively censor political views that those companies find objectionable.” While 85% of those on the political right believe this bias is real, 62% of those on the left also share this concern.

Regardless of one’s political views, the suppression of a major news story from a reputable news outlet is very troubling.

While Twitter said that it’s changing its policies to prevent similar incidents from happening again, Americans are no longer interested in repeated apologies or promises that these platforms will do better. They demand action.

Social media platforms need to leave their biases out of their business models and apply their rules and standards fairly and impartially, or they risk being overtaken by a tidal wave of government action, public criticism, and competing alternatives the free market is already creating to take their place.