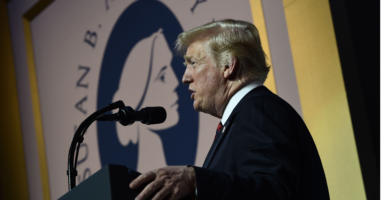 Lawmakers, ambassadors, and embassy officials gathered Thursday in Washington to commemorate a pro-life, pro-family international declaration signed by the United States during the Trump administration.

President Joe Biden ordered the withdrawal of the United States from the Geneva Consensus Declaration almost immediately after he succeeded Donald Trump as president Jan. 20.

Speakers at the gathering Thursday sought to underline the continuing importance of the document.

“What happened last year was historic,” Valerie Huber, architect of the Geneva Consensus Declaration and president of the Institute for Women’s Health, told assembled guests.

“Because it was the first time nations said not only ‘we agree’ with the precepts enshrined in the Geneva Consensus Declaration, but we commit to work together to achieve them,” she said.

In October 2020, the U.S., Brazil, Egypt, Hungary, Indonesia, and Uganda co-sponsored the Geneva declaration, which affirms the “dignity and worth of the human person.”

The declaration states that “every human being has the inherent right to life,” and the family is “the natural and fundamental group unit of society.”

“In no case should abortion be promoted as a method of family planning,” the declaration says, adding that “any measures or changes related to abortion within the health system can only be determined at the national or local level according to the national legislative process.”

“Your nations did more than sign a declaration,” Huber said in her remarks. “You became a coalition surrounding values that are core to who you are as a people and committed to ‘coordinated efforts in multilateral fora.’”

Both Russia and Guatemala recently joined the coalition, Huber said, welcoming these countries and expressing optimism that more nations will join in 2022.

Huber, who served as Special Representative for Global Women’s Health in the Trump administration’s Department of Health and Human Services, told attendees that their presence in Washington “tells the world that what was accomplished one year ago was historic then, and even more vital today because these pillars are under assault more aggressively than ever before.”

Huber read aloud a letter from former Vice President Mike Pence, who called the Geneva Consensus Declaration “one of the crowning achievements” of the Trump administration’s international efforts “for the cause of life.”

I’m grateful to all of my colleagues in the Trump-Pence administration and in the Congress who helped advance this life-affirming declaration, and I want to thank all the leaders representing countries from around the globe who have joined this historic coalition.

Although President Joe Biden has withdrawn the United States from the declaration, I can assure you that I, along with countless others across the country who cherish the sanctity of human life, will continue to celebrate this coalition and work for the day when America again leads the way in the cause of life.

“This growing coalition around the Geneva Consensus Declaration is critically important,” Grace Melton, the Heritage Foundation’s senior associate for Social Issues at the United Nations, told The Daily Signal following the event. “By working together, these UN member states can thwart the agenda of the powerful abortion advocates who continue to promote abortion as the solution to innumerable problems around the world.”

In coordination with the anniversary celebration, congressional Republicans introduced a resolution Thursday reaffirming that there is no international right to abortion.

The resolution, first reported by National Review and sponsored by Sens. Steve Daines of Montana and James Lankford of Oklahoma, celebrates the anniversary of the Geneva declaration and reaffirms its principles.

Rep. Jim Banks, R-Ind., introduced a concurrent resolution in the House urging “the signatory countries to the Geneva Consensus Declaration to defend the universal principles affirming life and the family expressed in the declaration.”

“This coalition could very well be the most effective advocate for health, the protection of life, family, and the defense of your own sovereignty as it grows in number and influence,” Huber told guests in concluding her remarks. “Working together, I believe we can ensure a lasting legacy for our nations and our children. Today we begin.”