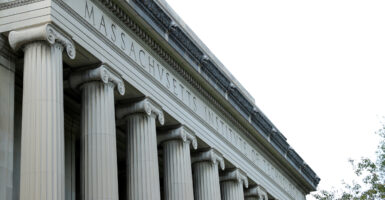 The Massachusetts Institute of Technology has canceled a lecture by physicist Dorian Abbot for reasons having nothing to do with the subject of the lecture. (Photo: Maddie Meyer/Getty Images)

Cancel culture has reared its ugly head once again, and this time in a new and unprecedented way.

A lecture by a physicist was canceled at one of America’s premier institutions of science, Massachusetts Institute of Technology, for reasons having nothing to do with the subject of the lecture. The lecture was canceled not because of its scientific content but because of the politically incorrect views on diversity of the scientist scheduled to give the lecture.

Dorian Abbot is a professor in the department of the geophysical sciences at the University of Chicago. He has an undergraduate degree in physics from Harvard and a Ph.D. in applied mathematics from Harvard.

Abbot was scheduled to give the annual John Carlson Lecture at MIT’s Lorenz Center in the department of earth, atmospheric, and planetary sciences. The topic was to be “climate and the potential for life on other planets.”

But this lecture will not take place.

In August, Abbot and Ivan Marinovic, an associate professor of accounting at Stanford University’s Graduate School of Business, published an opinion piece in Newsweek titled “The Diversity Problem on Campus.”

Abbot and Marinovic argued that the politically correct regime now taking control of America’s universities, which they identify as “DEI”—diversity, equity, and inclusion—is undermining the mission of what universities are supposed to be about. That mission is, per Abbot and Marinovic, “the production and dissemination of knowledge.”

When universities no longer look for the “most talented and best trained minds” in hiring, and politically motivated criteria drive hiring practices, the university’s “core business”—the “search for truth”—is undermined.

Abbot is now paying the price for publicly expressing such heresy.

Twitter outrage descended on the administration at MIT, and Abbot was disinvited.

So now academic speech is not just about what is said but who is saying it.

Abbot and Marinovic were right on target in their Newsweek essay, suggesting that the diversity, equity, and inclusion politically correct regime carries forward everything about racism that we supposedly have been trying to get rid of.

Racism is all about obliterating individuality and making predetermined judgments about who any individual is based on socially defined characteristics of the group to which they are assigned.

How can any black child in America not be injured when they are not taught that they are special and unique human beings but that what is most important is their color?

Science advances when we recognize that truth is bigger than and beyond any single human mind. Truth is discovered, piece by piece, through humility and hard work, not political arrogance, pretending we already know it.

We might recall that modern science only emerged some five centuries ago. It wasn’t all that long ago that most believed that the sun moved around the Earth rather than the other way around. Scientists such as Nicolaus Copernicus and Galileo Galilei, through honest observations, concluded the prevailing view was wrong. This was politically incorrect then; they were attacked, and their books were banned.

One famous graduate of MIT was the great Nobel laureate physicist Richard Feynman.

The increasing deference of reality to public relations, meaning suppressing what is true to serve what the politically correct want to be true, is destroying our national integrity, hurting the very people that supposedly we are trying to help, and threatening the future of our nation.

Political correctness is undermining personal responsibility and personal development. Now it is threatening to undermine science and truth.

MIT should step up and apologize to Abbot.