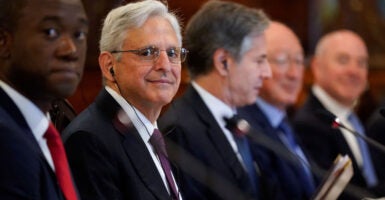 Attorney General Merrick Garland issued a threatening memo on Monday calling on the FBI to address “violent threats against school officials and teachers.”

It was an obvious shot at parents who oppose schools and school boards that promote woke ideology and critical race theory in classrooms that exploded this year.

Somehow, the story gets even worse.

Fox News reported that Garland’s son-in-law is the co-founder of Panorama Education, a company that works with school boards to promote “culturally responsive training” and other ideas associated with critical race theory.

Asra Nomani, vice president of investigations and strategy at Parents Defending Education, tweeted out more details about the Garland connection.

It’s noteworthy that Fairfax County Public Schools has been a battleground for debates about critical race theory and “anti-racism” ideas being used in curriculum and classrooms.

“Panorama’s contract was part of a broader, $78.8 million investment of coronavirus relief that [Fairfax County Public Schools] directed towards a ‘welcoming’ and ‘culturally responsive’ environment for students,” Fox News reported. “Its website explains that the funding is intended to ‘support equity professional development for school teams, and social-emotional staff to work directly with departments and school-based teams.’”

The Washington Examiner laid out what Panorama is specifically promoting.

“One workshop titled ‘SEL as Social Justice: Dismantling White Supremacy Within Systems and Self’ is designed ‘to explore actionable strategies for using [social and emotional learning] as a vehicle for social justice and advocacy in your community,’” Jerry Dunleavy wrote at the Washington Examiner.

The Examiner reported that one of Panorama’s slideshows calls on activists to say “‘I affirm my intersectionality,’ alludes to ‘unconscious biases,’ and defines ‘systemic racism’ as ‘the systematic distribution of resources, power, and opportunity in our society to the benefit of people who are white.’”

It’s all in the language of woke revolutionaries marching to the diversity, equity, and inclusion motto of the cultural revolution.

Sens. Ted Cruz, R-Texas; Mike Lee, R-Utah; and Marsha Blackburn, R-Tenn., sent a letter to Garland expressing concern about his memo and the potential conflict of interest. The letter read:

As a matter of policy, this memorandum is extraordinarily concerning, which is why we joined Senator [Chuck] Grassley’s letter on behalf of the 11 Republican members of the Senate Judiciary Committee in writing to you about this policy. Equally concerning, however, is reporting about an alleged connection between your family members and controversial curricula that will directly benefit from this memorandum and the chilling of speech.

You can read the rest here.

What the letter makes clear is that the whole situation is deeply disturbing and demonstrates yet again how radical the Biden administration is in practice.

Garland’s memo was released with no actual evidence of crimes committed, only vague references to a “rise in criminal conduct.” If anything, there have been more cases of those promoting critical race theory who’ve made public threats.

In July, Michelle Leete, vice president of communications for the Virginia state PTA and first vice president of the Fairfax County NAACP, yelled out to a pro-critical race theory crowd that opponents of their ideas should “die.”

Let them die. Don’t let these uncomfortable people deter us from our bold march forward.

This was met with applause, not a federal investigation.

The Garland memo solidifies the trend of weaponizing agencies to target and threaten political foes. It’s a tactic that was used under President Joe Biden’s former boss, too.

You disagree with the regime’s narrative about racism in America? Well, then you might be getting a little visit from the FBI.

But what justification does the administration have in using a federal agency to even be involved in these local crimes if they took place? The answer is that there is none, and Garland’s memo doesn’t even explain how this is within the authority of the Department of Justice.

The bottom line is that Garland is sending a message that the Department of Justice perhaps views protest and public opposition to school boards and government agencies that promote critical race theory as a criminal act that may lead to an investigation by the FBI.

It’s hard to interpret this move as anything other than an attempt to chill speech and intimidate people into silence. And it demonstrates how the Biden administration is eager to use a government agency, working alongside a left-wing advocacy group, to bully and threaten opposition using the levers of public power.

The situation is a microcosm of the interconnected and incestuous world of the ruling class, where peddling woke ideology is intrinsically and often literally connected to its own wealth and status.

The diversity consultant class is well-paid, well-connected, and guaranteed to make a killing peddling its poisonous ideology to teachers and our country’s children. If you don’t like that, too bad, you’re being watched now for thoughtcrimes.

This whole episode demonstrates a shameful abuse of a government agency in the name of ideology, and just shows why a growing number of Americans have no trust in our country’s largest public and private institutions.