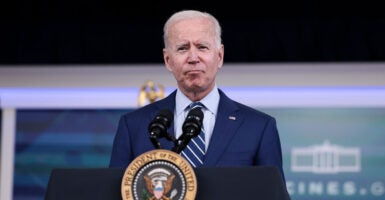 President Joe Biden recently tweeted: “My Build Back Better Agenda costs zero dollars. Instead of wasting money on tax breaks, loopholes, and tax evasion for big corporations and the wealthy, we can make a once-in-a-generation investment in working America.” Pictured: Biden delivers remarks ahead of receiving a third dose of the COVID-19 vaccine in the White House Sept. 27, 2021, in Washington, D.C. (Photo: Anna Moneymaker/Getty Images)

This week, President Joe Biden made the incredible statement—sycophantically repeated by the press—that his $3.5 trillion budget bill, which includes major spending initiatives on everything from climate change to Medicare, would be “free.”

Biden tweeted, “My Build Back Better Agenda costs zero dollars. Instead of wasting money on tax breaks, loopholes, and tax evasion for big corporations and the wealthy, we can make a once-in-a-generation investment in working America.”

This asinine notion immediately rocketed around the political sphere. White House press secretary Jen Psaki explained, “The reconciliation package will cost zero dollars.” Rep. Pramila Jayapal, D-Wash., said, “This is a zero-dollar bill because it’s all going to be paid for with taxes on the wealthiest corporations and the wealthiest individuals, which makes it more popular than it even was before.” Members of the media began repeating the line ad nauseum. The reason was obvious: Democrats are trying to cudgel Republicans into acquiescing.

Putting aside the contention that Biden’s bill would be paid for through tax increases—a doubtful proposition, given that the Democrats have been playing accounting games by extending particular allowances for just a handful of years, or backloading new costs until years down the road—the baseline notion that government spending is zero-cost so long as it doesn’t take on new debt is bonkers. It’s the equivalent of arguing that so long as someone pays for a cocaine-fueled gambling binge in Vegas in cash, the experience has been cost-free.

Biden, however, goes even further. In his addled brain, allowing taxpayers to retain their own money is “wasting money”; spending trillions of dollars on social programs that pervert market incentives and often achieve the precise opposite of their stated intentions is an “investment.” Such a designation divests language of meaning.

If you steal my wallet and find $100 inside, proceed to inform me that giving me back $20 would be “wasting money,” snidely notify me that you will be “investing” in a steak dinner for yourself, and then cap your performance by stating that the dinner is “zero cost,” you would deserve a rather thorough thrashing. Do it in the context of national politics, however, and the media will cheer.

The American system was founded in direct opposition to this idea. As James Madison wrote, “Government is instituted to protect property of every sort … This being the end of government, that alone is a just government, which impartially secures to every man, whatever is his own.”

Madison added, “That is not a just government, nor is property secure under it, where the property which a man has in his personal safety and personal liberty, is violated by arbitrary seizures of one class of citizens for the service of the rest.”

Biden would call just such sorts of arbitrary seizures “investments.” After all, they’re free. To Biden, such language seems natural: He is a career-long ward of the state, on the taxpayer dole every year of his life since the age of 29—the only exceptions being the years between his vice presidency and his presidency, when he was giving speeches and writing books about his government years while allegedly avoiding half a million dollars in taxes.

To him, taxpayer dollars are free, and they have been an investment: in him. Now, he simply wishes to extend that logic outward, using taxpayer dollars to “invest” in his legacy, in structures that incentivize dependency, and therefore Democratic electoral power.

Except it isn’t. The engine of American growth has never been the government. It has been restrictions on governmental power and bureaucratic arbitrariness. Innovation requires freedom; investment requires both liberty of choice and impartiality of governing system. The heavy hand of government will be damnedly costly.