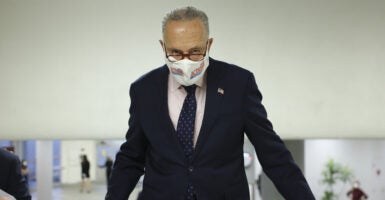 We’ve gone from spending like drunken sailors in normal times to drawing the last drops of blood out of drunken sailors passed out on the street during a pandemic. Pictured: As Congress continues to work Thursday on a $3.5 trillion spending bill, Senate Majority Leader Charles Schumer, D-N.Y., walks to his office at the Capitol. (Photo: Kevin Dietsch/Getty Images)

The massive spending bill backed by President Joe Biden and Democrat leadership in Congress highlights just how radical their party has become and the farce behind billing the Biden presidency as a “moderate” alternative to the far left.

The $3.5 trillion spending measure has been billed as a way to promote health care and repair or build more infrastructure, as well as provide an additional Band-Aid to an economy hit hard by the COVID-19 pandemic.

With this spending bill, though, the problem isn’t just the sheer cost of the thing. That $3.5 trillion cost is a substantial issue given the weight of our national debt—which has mushroomed as of late—and the growing effects of inflation.

It appears that for leading Democrats, the mentality on such concerns is “damn the torpedoes, full steam ahead!”

The spending bill’s cost to the American people will be substantial, especially given that our federal government hasn’t been saving for a rainy day. We’ve gone from spending like drunken sailors in normal times to drawing the last drops of blood out of drunken sailors passed out on the street during a pandemic.

Is this really sustainable?

The spending issue on its own is deeply concerning. What makes this bill worse is how it’s crammed with all kinds of straight giveaways to Democrat-oriented groups, as well as policies that wouldn’t pass through stand-alone legislation.

In many ways, this seems to be the Democrat strategy in the Biden era: moderate-sounding legislation that cloaks a radical agenda to transform the American way of life.

That would have transformed and nationalized American elections in a way most amenable to the most progressive part of the Democrat Party.

That bill would have forced transgender ideology on the whole country.

The bill is full of all kinds of kickbacks for public sector labor unions. No surprise there.

“Labor is not only all over supporting it, it has helped craft it,” American Federation of Teachers President Randi Weingarten said of the spending bill in an interview with Politico.

This is the same Randi Weingarten who insisted that public schools aren’t pushing critical race theory, but then immediately reversed course and said her teachers union would do everything it could to shield teachers who taught critical race theory in opposition to state laws.

The bill even has a giveaway for journalists: a tax credit that would pay local publishers tens of thousands of dollars for each journalist they employ. This is being justified as a way to save local news outlets, but it seems more like a perverse incentive to make the press universal wards of the state.

As Adam Guillette, president of Accuracy in Media, wrote in The Daily Signal: “Think of it as a way to turn every news outlet in America into a version of NPR.”

As if that’s what we need.

In a larger sense, Democrats’ spending bill is a testament to where their party is right now. Perhaps the most egregious element, on top of everything else, is how they tried to use it to jam through amnesty for illegal immigrants.

During a historic surge at the southern border that even Biden’s Homeland Security Secretary Alejandro Mayorkas called “one of the toughest challenges we face,” Democrats apparently are eager to ensure that even more people come across the border illegally.

An earlier version of the spending bill would have given amnesty to 8 million illegal immigrants, the largest grant of amnesty in American history.

“This Russian-nesting-doll approach may be a clever legislative strategy, but it is terrible democratic accountability,” wrote the editors at National Review. “There is no way that this immigration proposal would pass if it were a stand-alone measure subject to normal scrutiny and debate.”

This provision was struck down, not because Democrats balked at how extreme it was, but because the Senate parliamentarian said it violated the chamber’s Byrd rule.

The Senate parliamentarian may have stopped this bout of stealth amnesty, but the fact that Democrats tried to lodge it in a massive spending bill reveals the falsehood of prominent Democrats’ rhetoric that they aren’t for open borders.

The bottom line is that the cost of this spending bill would go beyond the $3.5 trillion price tag. There is a reason that the few remaining centrist Democrats balk at it and Republicans are in lockstep against it.

Biden’s “Build Back Better” campaign slogan apparently really meant that we would crumble quicker and remake America atop the rubble.