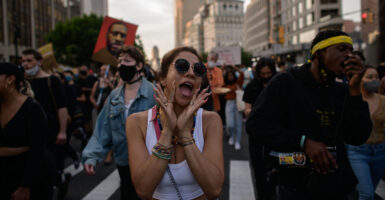 The change simply affirms what people with common sense already knew: National Public Radio isn't just committed to reporting the news but to engaging in political activism. Now it will just be more obvious. Pictured: Black Lives Matter protesters march May 25 in Brooklyn, New York, on the anniversary of George Floyd's death in the custody of Minneapolis police. (Photo: Ed Jones/AFP/Getty Images)

The thin veil over National Public Radio’s commitment to objective journalism has been lifted.

NPR has announced a new ethics policy that allows its journalists to “participate in activities that advocate for ‘the freedom and dignity of human beings’ on both social media and in real life.”

“The new policy eliminates the blanket prohibition from participating in ‘marches, rallies and public events,’ as well as vague language that directed NPR journalists to avoid personally advocating for ‘controversial’ or ‘polarizing’ issues,” NPR announced Wednesday.

As more than a few have noted on social media, despite NPR’s allowance for activism on behalf of the “freedom and dignity of human beings,” don’t expect too many of its reporters to join a pro-life protest any time soon.

If anything, this change will simply affirm what people with common sense already knew: NPR is not just committed to reporting the news, but engages in activism. Now it will just be more obvious.

In many ways it’s simply following the trend of the media industry as traditional outlets—many of which already leaned to the left—now have become much more aggressive and open about their activism.

In the case of some major outlets, it seems social justice warriors have taken over newsrooms. They now create an environment where even mildly dissenting voices are swiftly stamped out and fellow employees have to be careful so as not be the target of an internal woke crusade.

What’s almost humorous about the timing of NPR’s announcement is that it comes just a week after the outlet ran a long hit piece attacking Ben Shapiro’s website, The Daily Wire, essentially for spreading disinformation just because it is conservative. Here’s the biggest laugh line in the NPR piece:

By only covering specific stories that bolster the conservative agenda (such as negative reports about socialist countries and polarizing ones about race and sexuality issues) and only including certain facts, readers still come away from The Daily Wire’s content with the impression that Republican politicians can do little wrong and cancel culture is among the nation’s greatest threats.

NPR’s takedown of The Daily Wire appears to be that it’s a self-described conservative website that doesn’t reinforce left-wing narratives like other news outlets do. How dare they! Actually, NPR’s line does fit another website almost perfectly with just a few adjustments:

By only covering specific stories that bolster the progressive agenda (such as polarizing ones about race and sexuality issues) readers still come away from NPR’s content with the impression that Democrat politicians can do little wrong and former President Donald Trump is among the nation’s greatest threats.

NPR long has had a left-leaning bent, but anyone who has paid attention to its coverage in the past few years would recognize that the nonstop left-wing political narratives that focus on gender and race have been put into overdrive.

Substack writer and incisive media critic Matt Taibbi wrote a fantastic takedown of NPR’s ridiculous piece. For an NPR reporter to complain about another website’s talking about race and sexuality issues or using “buzzwords” demonstrates a remarkable lack of self-awareness.

NPR has not run a piece critical of Democrats since Christ was a boy. Moreover, much like The New York Times editorial page (but somehow worse), the public news leader’s monomaniacal focus on ‘race and sexuality issues’ has become an industry in-joke. For at least a year especially, listening to NPR has been like being pinned in wrestling beyond the three-count. Everything is about race or gender, and you can’t make it stop.

Last year, NPR gave a softball interview to an author who wrote in defense of looting. It ran an article about how to “decolonize” your bookshelf. Its countless articles about race are often just absurd.

The biggest takeaway from the NPR announcement is this: Is it appropriate for a taxpayer-funded website to be both highly partisan and activist?

NPR’s bias has been obvious for a long time. It’s now barely more than a state-funded Pravda, churning out pro-progressive stories and allowing its reporters to openly embrace various political causes.

If NPR was an independent website, this wouldn’t be as big of an issue. It would be just one of countless other left-wing media outlets contributing to the noise.

A sizable amount of money.

NPR gets only a small portion of its total budget from the federal government, but at this point one wonders why it receives this endless gravy train? It’s more than a little ridiculous, given NPR’s obvious political slant.

Its green light on activism for employees just confirms what most should already have known.

And perhaps this is a positive. At the very least, NPR’s policy change will do a good job of exposing what its newsrooms really stand for. NPR no longer will be able to hide behind a kind of faux objectivity.