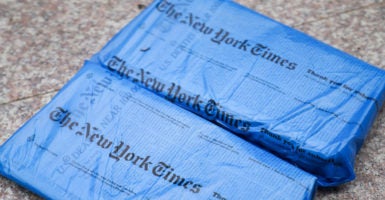 In the wake of the protests and riots that erupted following the killing of George Floyd by a Minneapolis police officer, a revealing transformation has been occurring in the country’s media landscape.

This is now the message coming from the media: The narrative about how society should look at this incident shall remain in accordance with the most radical, “woke” voices. Deviating opinions will not be tolerated. Words are violence.

That attitude was on full display in a dustup at America’s leading liberal newspaper.

Chaos at The New York Times began after it published an editorial by Sen. Tom Cotton, R-Ark., who argued that cities with police forces overwhelmed by looting and violence have the option, under the federal Insurrection Act, to request aid from the military.

The article’s headline was “Call in the Troops,” which had been selected by New York Times editors.

In it, Cotton explained how military force has been used to quell domestic unrest in the past, including those who attempted to obstruct desegregation at Little Rock’s Central High School in Arkansas in 1957.

The same New York Times has also published Russian leader Vladimir Putin, a member of the Taliban, a long symposium glorifying the communist Russian Revolution of 1917, and even an excerpt of “Mein Kampf” in the 1940s (to demonstrate the philosophy of Hitler as the nation entered World War II).

Yet, an editorial by a U.S. senator, articulating views shared by more than half of registered voters and 37% of black voters, according to a Morning Consult poll, is beyond the pale and a literal threat to fellow Americans?

Instead of standing by the practice of publishing diverse opinions, The New York Times appended a lengthy editor’s note to Cotton’s column, saying that the piece “fell short of our standards and should not have been published.”

However, the note didn’t list any serious fact-based inaccuracies and only nitpicked at Cotton’s characterizations of the protests. It concluded by saying that the tone of the piece was “needlessly harsh.”

I challenge anyone reading the piece to check out this week’s lineup of New York Times editorials and columns and not find one that’s harsh. A recent Paul Krugman editorial column, for instance, insinuated that President Donald Trump is provoking a race war and that the president is “clearly itching for an excuse to use force.”

It didn’t end there, however. The editorial-page editor, James Bennet, was effectively forced to step down and resigned from the position.

Whatever else can be said of the merits of Cotton’s piece or of whatever else is published generally in The New York Times, it’s increasingly clear that newsrooms of the most prominent liberal publications are being taken over by the most radical voices, who demand that they maintain an increasingly rigid ideological line in how they cover—and comment on—the news of the day.

Similar revolts and controversies have occurred in other newsrooms across the country.

The top editor of the Philadelphia Inquirer, Stan Wischnowski, resigned on Saturday after he received blowback from the paper’s staff about an article given the headline “Buildings Matter, Too.”

The article was about damage to buildings and how riots are destructive.

The Inquirer issued an apology and said: “The headline offensively riffed on the Black Lives Matter movement, and suggested an equivalence between the loss of buildings and the lives of black Americans. That is unacceptable.”

Meanwhile, the news website Axios released a memo telling its reporters that they can join the protests taking place around the country and that the company would bail out employees who get arrested and would also cover medical expenses for those who get injured in the process.

The fact is, most of America’s leading “mainstream” media outlets have leaned to the left—in some cases, the far left—of the average American for a long time. Generations, really.

The difference, however, is that in the past they at least attempted to thread the needle of nudging the country leftward without outright devolving into cheerleading for the Democratic Party or leading with activism at the expense of at least some measure of objectivity.

Wesley Lowery—a correspondent for “60 in 6,” a short-form spinoff of CBS’ “60 Minutes” for the Quibi short-form streaming service—wrote of this turning point in journalism on Twitter:

“American view-from-nowhere, ‘objectivity’-obsessed, both-sides journalism is a failed experiment. We need to fundamentally reset the norms of our field. The old way must go. We need to rebuild our industry as one that operates from a place of moral clarity.”

That old dynamic of objectivity is crumbling, as newsrooms are now being turned entirely over to the whims of the most activist social justice warriors, who demand political conformity with a strident push toward the left’s current cultural and political aims.

It’s a process that has already taken place on America’s college campuses for several generations as aggressive left-wing activists push the mostly liberal faculty and staff to be more aggressively left-wing. But campus politics are spilling over into the rest of society.

Nikole Hannah-Jones, the lead architect of the Pulitzer Prize-winning—but factually challenged—“1619 Project,” actually did a good job of revealing and elucidating what’s happening in our leading newspapers’ newsrooms.

She said in an interview with CNN on Sunday that outlets need to abandon the adherence to “evenhandedness, both-sideism,” and that an article offering the views of someone like Cotton should only occur in a news piece “where we can check the facts, where we can push back,” so readers wouldn’t receive what she called “misinformation.”

We can’t let people decide for themselves what to believe, after all, without social justice warriors—I mean, reporters—guiding the way and leading us along. People might start to form opinions of their own. The horror!

Hannah-Jones then said, “Our role as journalists is to give people correct information so they can make decisions,” but clearly demonstrated that she thinks the role of journalists is subtle and not-so-subtle activism, rather than simply reporting the news.

So, the mask is coming off for media outlets, big and small, that are now revealing that they are ultimately tools of the political left, rather than objective guardians of truth as they often portray themselves.

Perhaps that’s a case of back to the future. After all, into the early 20th century, newspapers were mostly partisan organizations affiliated with political parties without the veneer of independence.

The recent actions of many prominent media outlets simply reveal and highlight what many Americans already know; namely, that they have an agenda beyond simply publishing “all the news that’s fit to print,” as the Times’ motto insists.

It’s a clarifying moment—or at least it should be—for Americans who have been under the illusion that they can simply trust, without question, what they see in even the most prominent and established publications.