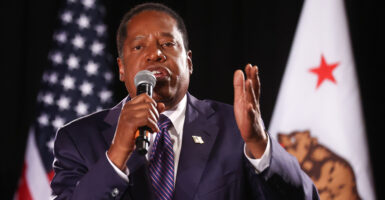 That appears to be the take from California’s recall election Tuesday, which saw Gov. Gavin Newsom, a Democrat, defeat a long list of challengers. The most prominent of them was Larry Elder, a conservative talk radio host.

It’s been a long time since Republicans have done anything at the statewide level in California, and the Golden State is even more left-leaning than when it recalled another Democrat, Gov. Gray Davis, in 2003.

Recalling and removing even an unpopular and failing Democrat politician such as Newsom was going to be a tall order regardless, especially when he has such a financial advantage.

But for the record, it’s important to note the vicious smear campaign directed at Elder, a black Republican.

California’s progressive powers that be are among the most committed to the woke “Diversity, Equity, and Inclusion” revolution. California not only includes critical race theory in its statewide K-12 curriculum, but outright mandates ethnic and social justice studies at its public universities.

Yet Elder, who would have become the state’s first black governor had he won, was smeared continually by California media at the behest of the left in the most absurd and often quite offensive ways.

The Los Angeles Times ran an opinion column in August headlined “Larry Elder is the Black face of white supremacy. You’ve been warned.” Another Los Angeles Times columnist linked Elder to the politics of David Duke and the Ku Klux Klan.

In fact, the Times ran often misleading attacks on Elder almost nonstop from the moment he entered the campaign to replace Newsom as governor.

Late in the campaign, Elder was subjected to an assault by an unidentified white woman in a gorilla mask who hurled an egg at him. It was a disgusting act.

Imagine, for a moment, that this identical attack had occurred against a black Democrat. Kyle Smith, writing for the New York Post, was spot on with this analysis:

We would be treated to multiple news analyses about the history of the usage of gorilla tropes against blacks. Joy-Ann Reid, Rachel Maddow and Don Lemon would be doing hour-long broadcasts on the attack, convening panels discussing just how the attack pulls the scab off racism in America, and proves we have so much work left to do in dealing with the problem. Vox would commission a series about California’s grim history of racism dating back to the Chinese Exclusion Act, and Asian-American and Latino writers would hasten to explain that California’s historic hostility to all sorts of persons of color is as traditional as its Tournament of Roses parade.

What was the media’s response to the attack on Elder?

From the national media, crickets.

The LA Times actually covered the story, but buried the lede.

“The Los Angeles Police Department is investigating an altercation Wednesday in Venice involving a group of homeless people and supporters of Larry Elder, Republican candidate for governor,” the newspaper’s report began.

This not only dodges the main story, but makes it seem like it was Elder and his supporters who provoked the incident rather than an apparent leftist agitator.

Even worse, the Times published a photo from that event that made it look like Elder was slapping a woman, when she actually was a supporter whom the candidate was about to embrace.

The newspaper later changed the photo after receiving criticism, but it’s hard to see this as simply a thoughtless mistake in photo choice given the other coverage of Elder.

Perhaps this is all entirely unsurprising for those who have observed partisan media behavior in recent years.

We live in such a twisted media environment that so-called journalists define a black man who is the son of a Marine from South Central Los Angeles as the “face of white supremacy,” but give a pass to his privileged opponent from a wealthy family.

As columnist William McGurn writes in The Wall Street Journal:

Newsom’s father was a well-connected state judge who once managed one of the trusts for the family of oil magnate J. Paul Getty. As for his son, the Los Angeles Times says that ‘a coterie of San Francisco’s wealthiest families has backed him at every step of his rise.’ This privilege is reflected in the $70 million Mr. Newsom raised to fight the recall—more than five times the $13 million raised by his leading challenger, Republican Larry Elder.

The so-called Diversity, Equity, and Inclusion movement is all about ending “white privilege” unless there is a “D” next to the name on the ballot.

As far as political campaigns, maybe none of this matters much. Elder, who claimed 47% of the vote and led the 46 candidates to replace Newsom, went down in a political environment in which only a progressive Democrat can win statewide office no matter how badly he or she has failed.

However, it does demonstrate just how much the Diversity, Equity, and Inclusion mantras are really a mask for political power.

Even if you are a minority and what progressives see as part of a historically oppressed group, you almost certainly will be redefined as a “white supremacist” if you oppose their power in any way.

All failures, malfeasance, and privilege will be excused away, as long as it’s useful for “the cause.”