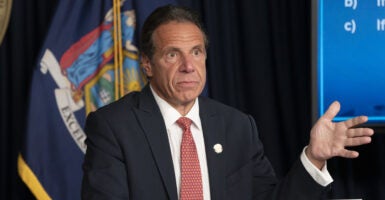 The nation’s largest LGBTQ rights advocacy group has fired its president for advising New York Gov. Andrew Cuomo, a Democrat, on addressing the sexual harassment allegations against him.

“As a black, gay man who has spent his whole life fighting for civil and human rights, they cannot shut me up,” David said. “Expect a legal challenge.”

The organization announced in early August that it had retained Sidley Austin LLP to conduct an internal investigation into David’s actions following news that an investigation into New York’s Democratic governor found Cuomo “sexually harassed a number of state employees through unwelcome and unwanted touching, as well as by making numerous offensive and sexually suggestive comments.”

“Their refusal to offer up the findings, even with the indication that they found no evidence of wrongdoing, and yet still urge me to consider resigning during a holiday weekend to avoid media interest, does disservice to any persons or organizations involved in the fight for civil and human rights,” David said.

“We need to end this bullying and a cloak and dagger process that disrespects what we agreed to and that now has the co-chairs scrambling, trying to backpedal and recreate truths.”

David provided confidential files on Cuomo accuser Lindsey Boylan to senior Cuomo advisers, participated in the drafting of a letter discrediting Boylan, and sought out women to provide positive statements about the governor, according to a report on the investigation by the New York Attorney General’s Office.

David also reportedly kept confidential files “relating to his investigation into and counseling” of Boylan before she left the executive chamber, according to the office’s report. It said David provided these files to Cuomo senior adviser Richard Azzopardi on Dec. 11, shortly after Boylan began tweeting about Cuomo.

“Mr. David testified that he kept with him a copy of Ms. Boylan’s files because it ‘may have been the only instance where [he] was actually involved in a counseling of an employee when [he] was in the Executive Chamber,’” the report said.

Former senior Cuomo adviser Melissa DeRosa told other staffers in a Dec. 16 text message that David had agreed to sign a letter attempting to discredit Boylan “if we need him,” according to the report. The report said that David initially had declined to sign the letter, which ultimately was not published.

“The various drafts of this letter included complaints against Ms. Boylan that were part of the confidential files,” the attorney general’s report said. “The drafts also discussed alleged interactions between Ms. Boylan and male colleagues other than the governor.”

The report also said that the letter “denied the legitimacy of Ms. Boylan’s allegations, impugned her credibility, and attacked her claims as politically motivated (including with theories about connections with supporters of President [Donald] Trump and a politician with an alleged interest in running for governor).”

The Human Rights Campaign did not responded to multiple requests for comment from The Daily Caller News Foundation.