Cuomo’s Resignation Is Not Enough. He Must Be Held Accountable. 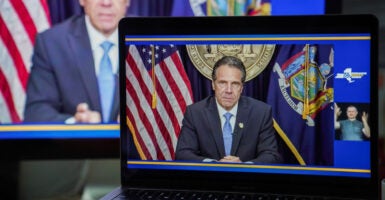 New York Gov. Andrew Cuomo on Tuesday said he was resigning amid mounting pressures from sexual harassment allegations and investigations. Already, the left is attempting to sweep this scandal under the rug. (Photo: Wang Ying/Xinhua via Getty Images)

New York has a long and storied history of corrupt, immoral, and even downright stupid politicians. From the glory days of Tammany Hall, when the Democratic machine was operating as little more than an organized crime syndicate, all the way through to the general sleaziness of Eliot Spitzer and Anthony Weiner, New Yorkers have really seen it all.

As a native New Yorker, I think this experience is a likely explanation for our world-weary attitude. The latest saga of Gov. Andrew Cuomo has merely added to our jaded outlook.

Cuomo announced his resignation on Tuesday amid the threat of impeachment coming from the State Assembly and the ongoing calls from virtually everyone—including President Joe Biden—for him to step down.

This pressure began with the release of a report from the New York Attorney General Letitia James, which found that Cuomo had sexually harassed 11 women (including a New York state trooper) and created a hostile work environment for women.

The governor’s resignation came two days after that of his top aide, Melissa DeRosa, who the report identified as a key figure in attempts to smear one of the governor’s most prominent accusers.

As New York, once again, attempts to pick up the pieces after a major political scandal, the danger now is that the left, eager to move on from the bad publicity of Cuomo, will attempt to sweep his scandal under the rug before the mess is truly cleaned up. (Biden has already stated that apart from his personal behavior, Cuomo did a “hell of a job” as governor.)

Glossing over these issues is a mistake and a tremendous disservice to the people of New York.

Despite the fact that Cuomo has resigned, justice still must be served. If Cuomo is not held accountable for his actions, then the culture of intimidation that allowed him to flourish will continue, just under new management.

It is encouraging that both the Nassau County and the Albany County district attorneys’ offices have announced that their investigations into possible criminal charges related to the sexual harassment allegations will continue. However, public pressure will help prevent politicians from moving on from this without demanding real culpability.

It is important to remember, as well, that Cuomo must also answer for the devastating deaths of COVID-19 patients in New York nursing homes.

This means he must taken to account for the part his administration played in requiring nursing homes to accept COVID-19-positive patients as well as his role in the cover-up and undercounting of deaths. More than 15,000 elderly and disabled New Yorkers died as a result of this horrific action while Cuomo was basking in fulsome acclaim on CNN.

While many in the State Assembly may be inclined to let the issue rest, at least one Democratic assemblyman seems determined to pursue justice. Assemblyman Ron T. Kim, who has been very vocal about fighting for the nursing home victims and their families since the scandal broke, stated after the resignation announcement that his colleagues must demand accountability for both women and “older adults in the state of New York.”

Kim was one of the few Democratic lawmakers brave enough to call out Cuomo for his handling of the nursing home fiasco at the height of Cuomo’s pandemic popularity. For his refusal to back down, Kim reports he was subject to threats by Cuomo.

The public must continue to demand that Cuomo be held accountable. If nothing is done now, there is a serious risk that he could avoid justice and slip into a comfortable retirement. This could allow the cycle of corruption to continue when what New York needs most is to clean house.

In his resignation announcement, Cuomo attempted to highlight some of the so-called accomplishments of his administration, but he failed to mention his chief triumph. During his time as governor, Cuomo has accomplished something truly notable in New York’s nearly 400-year history. He has distinguished himself as perhaps the most morally bankrupt of all New York politicians.

In his depravity, he outshines them all. This is his legacy.