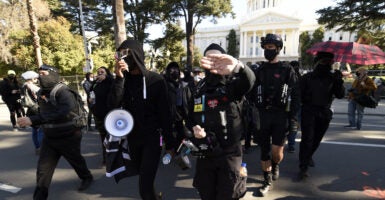 “Public schools are trying to indoctrinate our kids!” When parents hear statements like this, all too often they dismiss it as a right-wing conspiracy theory. But the evidence is piling up that shows this is not just a theory, and it’s time for parents to start taking indoctrination in school seriously.

The latest example of school indoctrination was uncovered by Project Veritas. In a recently released recording, a California public school teacher, Gabriel Gipe, a member of the Sacramento Antifa chapter, is caught not only stating, “I have 180 days to turn [my students] into revolutionaries,” but citing Mao Zedong as an inspiration for his tactics to radicalize his students through fear and propaganda.

Gipe states that in order to bring about a Maoist-like revolution in the United States, activists must be “consistently focusing on education and a change of cultural propaganda … We have to convince people that [socialism] is what we actually need.”

Photos of Gipe’s classroom show that he has a portrait of Mao prominently displayed, alongside both Antifa and gay pride flags.

It is clear through Gipe’s admission that he does not consider himself an educator. He views himself as a propagandist and a recruiter for a cultural revolution in the United States.

Unfortunately, he is not alone. Gipe states that there are many more teachers like him than there used to be, including at his own school. Another California teacher, Kristen Pitzen, has been placed on administrative leave after posting a video instructing her students to pledge allegiance to the gay pride flag.

Just recently, the union head of Los Angeles public schools called learning loss due to the pandemic “a myth.” She stated, “It’s OK that our babies may not have learned all their times tables… They know the difference between a riot and a protest. They know the words insurrection and coup.”

In other words, education doesn’t matter to these educators, as long as their students’ politics lean in the correct direction.

Parents have flooded school board meetings protesting the many failures of public education that have dominated the past year: the teaching of critical race theory, anti-American curricula, mask mandates for children, and endless school closures, to name a few.

This momentum among parents is an encouraging sign that Americans are simply not going to tolerate teachers like Gipe indoctrinating their children anymore. This indoctrination is particularly egregious in areas without school choice programs, forcing parents to send their children to their district assigned school. No parent should be forced to subject their child to radical Marxist brainwashing.

Since the onset of the pandemic, 11 states have expanded their school choice programs, and another seven have created new programs. Additionally, the number of families choosing to homeschool their children has doubled.

Attitudes toward public education in the United States are changing dramatically in favor of parental choice, and parents in states without school choice programs should capitalize on this momentum and demand legislative change. Teachers such as Gipe must hear loud and clear from active parents that their children are not his, or anyone else’s, to indoctrinate.

School choice programs that allow education dollars to follow the students to whatever school or program they choose is the best way to break the stranglehold woke teachers have over America’s youth.