Yes, Schools Are Secretly Trying to ‘Gender Transition’ Kids, and It Must Be Stopped 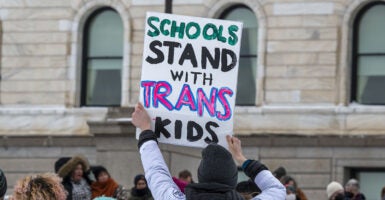 Abigail Martinez called the pain of losing her daughter a pain with no name. “Even when you breathe, it hurts,” she said during an event on radical gender ideology in schools.

Her daughter, Yaeli, began struggling with depression in the seventh and eighth grades after classmates criticized her appearance. Abigail described her daughter as a “girly-girl” who liked to dress up as a princess. So, when Yaeli said one day she felt like a boy, Abigail was surprised.

Abigail contacted the school about the bullying, and when they attributed Yaeli’s mental health issues to gender dysphoria, Abigail allowed Yaeli to adopt a boyish hairstyle and clothes. But, when Abigail wanted therapy for Yaeli’s underlying mental health issues, the school accused her of denying that Yaeli had started identifying as male in early childhood. What ensued was a wrestling match between Abigail and the government.

After California began paying for “gender transitions” for minors who are not in their parents’ custody, Yaeli ran away, hoping to gain access.

School officials told social services that Abigail’s daughter would be “better off out of the house.” Yaeli was put into foster care, and despite Abigail’s persistent attempts to get mental health treatment for her daughter, the system stonewalled her.

While in foster care and on cross-sex hormones, Yaeli’s mental health further declined. In 2019, she committed suicide at only 19 years old.

At the event on radical gender ideology at The Heritage Foundation, Abigail told the audience, “I want everyone to know the truth about what happened to our family, because it didn’t have to happen.”

More mothers and fathers across the country are waking up to the shock that schools and government officials are promoting transgender ideology in the classroom and then “socially transitioning” confused children, sometimes even behind a wall of secrecy. “Gender support plans” put out by school administrators require school employees to use names and pronouns that align with a student’s gender identity instead of their biological sex.

One of the world’s leading experts on gender dysphoria in children, Dr. Kenneth Zucker, warns that this is “a psychosocial treatment that will increase the odds of long-term persistence” of cases of gender dysphoria.

For the vast majority of children—80 to 90%—gender dysphoria is short-term, and they will eventually “desist” from identifying as the opposite sex if allowed to go through puberty. But when schools like Yaeli’s adopt a so-called gender support plan, they actively steer that child away from reconciling with their biological sex.

Parents in Wisconsin, Florida, and California filed lawsuits after learning that schools kept them in the dark or even defied their wishes on how to treat their children’s gender dysphoria.

Why would a school adopt a policy that so blatantly undermines the role of parents? LGBT activist groups like Gender Spectrum and Equality Federation have aggressively pushed legislatures in states like Virginia to adopt them. And school districts have become emboldened to deceive parents.

Alliance Defending Freedom recently sent a letter to school administrators in Harrisonburg, Virginia, after they informed staff: “If the parent/guardian is NOT aware, you should utilize the student’s preferred name at school but not in any communication with the parent/guardian.”

The Obama administration promoted gender support plans to schools under threat of punishment. In May 2016, the Department of Education issued a Dear Colleague Letter on the 1972 Title IX Education Amendments that directed schools to use pronouns and names that align with a student’s gender identity.

Footnote 3 of the letter linked to the department’s “Examples of Policies and Emerging Practices for Supporting Transgender Students.” The examples included faculty and staff asking “older” transgender identifying students what amount of information they wanted to disclose to parents. There is no definition of “older” in the guidance, and some transgender advocacy groups say that a 3-year-old can know they are “trapped in the wrong body.”

The policy has resulted in parents across the country being left without a clue as to what is happening with their children on a day-to-day basis. A District of Columbia public schools policy stated, “parental participation is not required,” and the Chicago public school guidelines directed staff not to disclose a student’s transgender name or pronouns to parents without student permission and “unless authorized to do so by the Law Department.”

In 2013, the Obama Department of Education investigated California’s Arcadia School District after an LGBT group filed a Title IX claim of sex discrimination on behalf of a girl who identified as a boy who was required to use cabins and locker rooms with other females. The district reached an agreement with the government that required it to adopt transgender policies. Yaeli Martinez attended a school in Arcadia and was socially transitioned under this new system.

The Obama administration also conducted a Title IX investigation into a school in Ohio and concluded that it had “harassed” a student by using her birth name and pronouns that aligned with her biological sex. That case was later closed by the Department of Education under Betsy DeVos’s leadership in 2017.

But the Biden administration is expected to issue a new Title IX rule soon that will reinstate an interpretation of “sex” to include gender identity in accordance with an executive order from President Joe Biden. The Department of Education has already issued a Fact Sheet on Supporting Transgender Youth in School that encourages socially transitioning students and maintaining their “privacy” and “confidentiality.” It does not require schools to notify parents.

Since schools across the country may face loss of funding if they don’t comply with the reinterpretation of “sex” under Title IX, parents can expect even more schools to adopt gender support plans. The foreseeable result is that schools will socially transition more students without their parents’ knowledge, much less their consent.

The U.S. Constitution and many state constitutions protect parental rights, including the right of parents to direct their child’s care and upbringing, and that includes treatment of their child’s mental health.

Parents and teachers are going to court to protect children from a radical ideology that can destroy their minds and bodies. Lawmakers can, and should, also put parents back in the driver’s seat. They can require schools to notify parents if their child is struggling with their gender identity and prohibit schools from engaging in unauthorized treatment of a student’s mental health. Doing so would put schools on notice that they cannot deceive parents about significant issues like a student’s confusion over gender identity.

Yaeli Martinez was born in the right body. But like many children, she was confused by a culture and a school system that told her she was born in the “wrong” one. Her mother knew better. The government should have respected her wishes, not ignored and overridden them.

Abigail has allowed her personal tragedy to become an example of great courage. May other families learn from her, so that they never have to experience the same pain with no name.