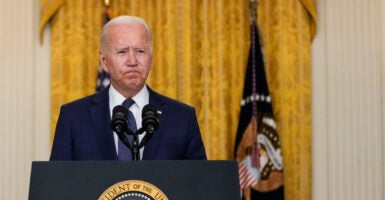 President Joe Biden speaks about the situation in Afghanistan in the East Room of the White House Aug. 26, 2021, in Washington, D.C. (Photo: Drew Angerer/Getty Images)

The blame game continues. In his latest speech on the unfolding chaos in Afghanistan, President Joe Biden fingered the terrorist group ISIS-K for the bombing at the Kabul airport. He then delivered more excuses why the hole he dug isn’t getting deeper.

After a 90-day intelligence review, his administration still can’t figure out if COVID-19 came out of a Chinese lab. But the president is already pretty sure ISIS-K organized the attacks on the Kabul airport.

Moreover, he thinks working with the Taliban still makes sense. So he continued to spend more time explaining how he is making all the right steps rather than coming up with a serious plan to address a situation that is rapidly spiraling out of control.

The president acknowledged that the U.S. knew this threat was coming—like a Mack truck with no brakes—yet the White House just watched while the airport got smacked. He did that because he discarded all other options on how to get out.

After creating an impossibly unsustainable situation with a chaotic no-plan plan for withdrawal—one in which he ignored the advice of military leaders and the intelligence community—he stated he was relying on the advice of military commanders. This is like Gen. Custer, after he was surrounded, asking his lieutenants, “What do we do now?”

ISIS-K may very well have conducted the bombing. Declaring the U.S. will go after it is far from a reassuring plan for a way forward.

For starters, part of Biden’s no-plan plan was to abandon the U.S. footprint in Afghanistan that allowed us to go after terrorists. The president keeps saying we will go after the terrorists “over the horizon,” but the U.S. already has such capability. Right now we pretty much have to come from the far side of the moon to get to Afghanistan.

Further, what’s worse: that the Taliban is in control of the terrorists, or that the terrorists are out of control? Either way, it’s clear they are back. Afghanistan went from being a relatively peaceful, stable theater to the hottest terrorist hot spot on the planet, and that is all the result of Biden’s decision. And he has still given no indication of any plan to deal with the tsunami of terror that is sure to come.

Biden wrapped up with the old tried and true: blaming former President Donald Trump. Biden has made the decision to make the response a referendum on his leadership. This is too large a claim to let pass. It’s about placing blame. It’s not about partisan sniping. It’s about understanding where we are, and what we have to do now—and that requires knowing what we did.

Let’s be honest with ourselves. Things are not going well, to put it mildly. This is not the best of all possible outcomes. On the 20th anniversary of 9/11, the Taliban will control more territory and have more money, more friends, and more arms than it did on 9/11.

Today we learned the perilous consequences of that development. It’s time for the White House and all of us to come to grips with that.